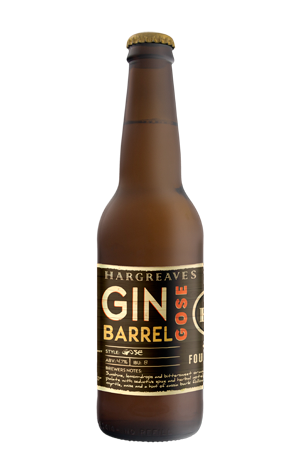 When you're near neighbours with a shared passion for flavour and finesse in booze, why not come together? That's what Yarra Valley's Hargreaves Hill and Four Pillars Gin did in 2016, joining forces to create a gose (the lightly salty and sour wheat ale style with origins in German and now reborn as something of a global phenomenon) that made use of the barrels the latter used for one of its gins. They didn't make a lot of it but it was enough to make it into our panel's Best New Victorian Beers of 2016 top ten.

Little surprise, then, that they decided to get the band back together – this time bottling some of the beer too. It's a deeply hazy, pale golden drop, one that unfurls slowly, like an ancient fern in a Yarra Valley forest, the further down the glass you go. At first, it's the souring acidity, saltiness and a touch of underlying oak-assisted funk that capture your attention, but the livelier, spritzier characters of the gin botanicals gradually make themselves known in greater number: lemon drop candy, lemon myrtle, anise, juniper and more besides. It's a combo engaged palates can find pleasure in as an offbeat, refreshing cleanser or, equally, as a beer to explore olfactorily over time.