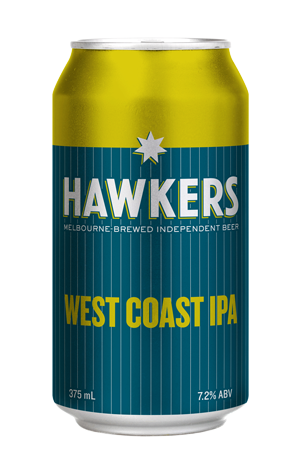 The second and third beers to roll off Hawkers' new canning line hit stores this week, with this West Coast IPA following the first, XPA, in doing so with a gaudy colour combo: green and gold chosen this time around to capture your gaze from busy bottleshop fridges. And, just as the XPA entered a similar segment of the market to the brewery's Pale Ale, albeit with a punchier and quite different hop profile, this IPA comes packing a punchier and quite different hop profile to Hawkers' original IPA – not to mention 10 percent more booze content.

As you'd expect from a West Coast style IPA, the malt profile is stripped back – pale, clear and lean – while the US and NZ hops are layered on heavy, with no less than 14 grams per litre (in layman's terms "a very lot"). The upfront hit is dominated by citrus fruit before the sort of characters you might associate with such IPAs join the party: piney, earthy, forest floor like and with a hint of diesel. Despite the heavy hopping and 7.2 percent ABV it seems relatively delicate at first – certainly it's no chewy beast and finishes dry as anything – but soon disavows you of that notion as the bitterness settles in and the booze begins to warm you...

The beer has since gone on to claim the Best IPA trophy at the Australian International Beer Awards and is brewed a handful of times each year.