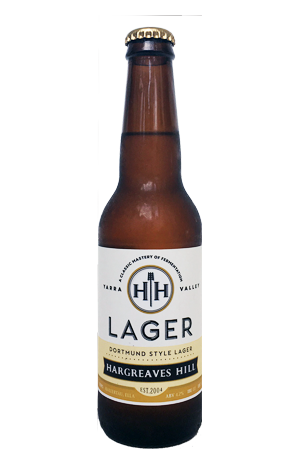 As part of the rebrand that Hargreaves Hill revealed in early 2018, there was a shuffling of the core lineup. Out went Golden Ale and Hefeweizen and in came two new beers. One of the replacements is this lager called, simply, Lager (the brewery's Zenith IPA is now called just IPA too), presumably coming in as something of a like for like replacement for the Golden Ale in terms of the drinkers it's hoping to satisfy.

There's plenty of smaller, independent Aussie brewers with a lager in their lineup these days that isn't black, red or hopped-to-the-eyeballs but more akin to the lagers that dominate the planet. And this is another, albeit one infused by the Hargreaves Hill ethos of respect for tradition and quality ingredients; they've not looked to replicate the lagers of Australia's industrial brewers but instead create a fond homage to the beers of the world's greatest lager brewing nation, Germany.

The Lager is inspired by those that traditionally come from Dortmund's brewers and delivers with accordant subtlety. Indeed, while jotting down tasting notes, the word "soft" kept cropping up whether in relation to the floral, old school hop aromas, clean cracker like malts or broad, floral bitterness. And soft, or delicate, is how these things should be: the ball-bearing at the centre of the beer flavour-aroma sphere.

If you're reading this in March 2018 and you're a Crafty Cabal member, you can enter a ballot to win one of four cases of this or the JNR.