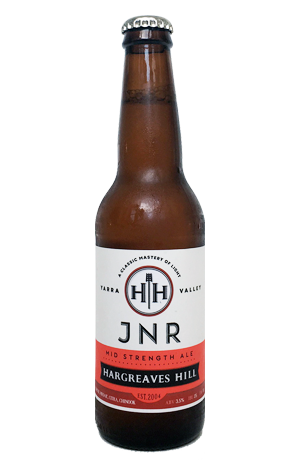 One of two beers to join the permanent Hargreaves Hill lineup from late summer 2018 onwards is a beer that has been around before, albeit under the rather less snappy title of Small Hoppy Ale. Sure, it told you what to expect and, in a new look range that puts cleanliness to the forefront – its five core range stablemates are named by style – maybe it could have ended up as Mid. But JNR does the job of telling you it's a smaller beer with more of a smile.

When we say smaller, in keeping with the way the world of mid-strength has been heading for a few years now, it's more a case of getting as much character you'd expect from a bigger beer into a smaller package. The only aspect you'd say was reduced here is the body, with little concession when it comes to hop flavour and aroma, coming courtesy of Simcoe, Mosaic, Citra and Chinook. From the slightly hazy pale gold beer in your glass you'll find lively citrus aromas and tangerine flavours, while it's light on the palate and signs off with a refreshing, pithy, citrusy bitterness.

If you're reading this in March 2018 and you're a Crafty Cabal member, you can enter a ballot to win one of four cases of this or the Lager.