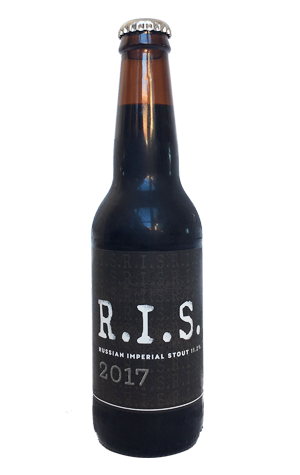 Hargreaves Hill's Russian imperial stout, R.I.S., has long been one of the big beers we look forward to when it makes its occasional appearances. It's tended to be among the larger (11 percent ABV plus) and fiercer of locally brewed imperial stouts, not holding back on its roasted and bitter characters, has picked up a gold medal in the past and fared well in both imperial stout tastings we've run in the past. And, while it's hard to draw comparison between beers you've had several years apart, this latest version could well be the best yet.

Where past vintages tended to sit at that roastier, more aggressive end of the scale, here it's as if the corset's been discarded to allow all manner of fulsome and rich flavours and aromas to join the party. Indeed, such is the lusciousness, you could convince someone it's spent time in barrels or features more than malt, water, hops and yeast, yet it's from those four ingredients – and Crown Lager's magic ingredient, time – that this conflagration of chocolate, coffee, vanilla, molasses, roasted barley, dark caramel and more has been created. Scrumptious.

And other good beer retailers around Victoria