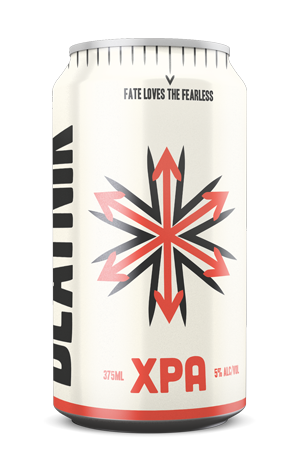 If you know Hargreaves Hill reasonably well, you'll know they've made a name for beers that are typically classically inspired and delivered in refined and traditional packaging. In the past year or so, however, they've loosened the shackles a little and had more fun with some of their limited releases and now, well into their second decade, they're taking things further still with the launch of the Yarra Valley brewery's first ever can.

Thing is, cans don't really fit with the carefully manicured Hargreaves Hill vibe so this XPA is also the launch of what they're tagging the brewery's "rebellious little brother": the Beatnik range. It's one that comes with a focus on design akin to some of the brands that make their way to these shores from Scandinavia, as well as a push towards becoming a more environmentally friendly brewery: biodegradable six-pack holders and 100 percent recycled and unbleached cartons.

All of which is well and good, but what of the beer inside? It's one they've been playing with for a while – if you've had a glass of Gen X, you'll be familiar. Pouring a bright, pale golden and with equally bright hop aromas – tropical, melony and reminiscent of a fruity Marlborough sauv blanc – that feed into juicy fruit flavours atop a slightly grainy base and a decent clip of bitterness, it's a beer that could offer mighty refreshment to the bearded, beanie'd wanderer featured in its accompanying blurb.

Join the team for a launch party at the Great Northern on October 7.