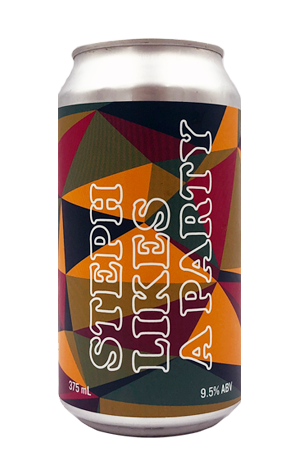 Around about this time last year, Hawkers unveiled the fruits of their first collaboration with Bale Breaker, the brewing arm of America's Yakima Chief Hops. It was one of those rare beers you come across that stop you in your tracks; sure, it was an IPA in a sea of IPAs, but the experimental hop variety within served up the most insanely broad range of experiences, and the specialty malt imported from Oregon added a delightfully rich and smooth base. Given Tom Needs More Friends wasn't hazy AF or juicy, it appears to have passed under the radar for many who judge beers with their eyes or Instagram likes, but was a standout of the year for many at Crafty Towers.

And now the follow up is here, with Tom (Madams of Cryer Malt) replaced by his colleague Steph Howard, who was featured in the #keepinglocalalive campaign the day I took delivery of the beer bearing her name. Again, the Bale Breaker collab sees the 692 hop make an appearance, but in a beer that's been ratcheted up to double IPA territory. It was intended to be the duo's offering for the postponed Carwyn Collaborational too, so there's plenty around for big, hearty beer chasers.

In the glass it looks like a barleywine, thanks to its deep russet colour, and the 9.5 percent ABV puts it in that sort of space too. Yet it's designed for drinking young rather than ageing, with the 692 contributing a floral, fragrant rose and red berry perfume with, possibly, a hint of Chivers Olde English Marmalade in there too. The hop aromas do their best to distinguish themselves from the blanket of sweet toffee and cake crust that delivers what the colour promises, while it's almost like fruitcake to taste, albeit one with a splash of liqueur poured over the top. It's not as heavy as that might sound, however, making for a welcome follow up to last year's classy debut.