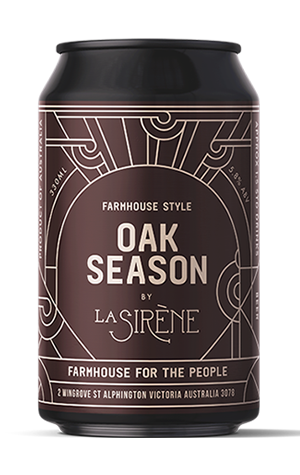 It's not that long ago that the vast majority of brewers in Australia doubted cans were the future for craft beer. Some were still investing more than a third of a million in bottling lines just a couple of years back. And yet here we are with a barrel-aged, blended wild ale inside them. What's more, it registers at not much weightier than a mid-strength.

Oak Season is a beer that punches above its weight, however, with much to be discovered within this palest of liquids. It possesses a creaminess of aroma and texture thanks to the oak and the mixed culture within; it's not far off an oaked chardonnay – at 4 percent ABV. In a can. Pretty radical, eh? There's plenty of vanilla, some orange citrus, a little stone fruit and a faint whiff of lingering funk, plus much in the way of: "How did we get here?"