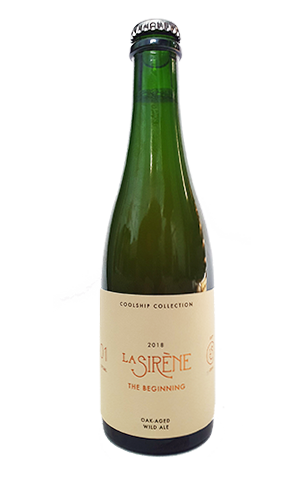 Anyone who’s spent a moment with Costa Nikias will likely have heard him speak about his love for La Sirène’s home in Alphington. It's in a small industrial pocket nestled by parklands and the Darebin Creek, making for a warehouse and surrounds where unique natural microbes tie the La Sirène beers to a physical space.

Now, nearly a decade on from the brewery’s conception, La Sirène have launched a new series that aims to capture those environs and moment in time in the sort of elegant package we’ve come to expect from them. The Beginning is the first release in their Coolship Collection, a 100 percent spontaneously fermented wild ale made in La Sirène's koelschip that spent 12 months developing in French oak.

Local fans of Belgium’s gueuze and lambic ales – or spontaneously fermented beers from elsewhere – will find much of what they love about those beers from the first whiff where the sour beer meets with a light funk. The sourness starts out subtle but builds substantially as you work your way through the glass, bringing a sweet acidity into play alongside a mix of fresh citrus. Though there’s some weight to the palate and oak character, the beer possesses a minerality and a dry finish too.