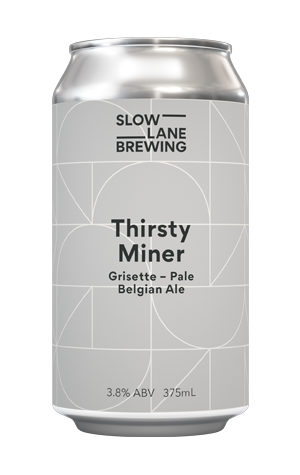 The grisette style could be described, in simple terms, a lower ABV saison or a session farmhouse ale. There have been a few released in Australia over the years – plus an "imperial" one from Shenanigans that remains one of the best I've had the pleasure of enjoying in more than ten years of exploring Aussie beer culture – and often they come across that way: a less impactful version of a pale farmhouse ale.

Slow Lane's is named in honour of the beers from Belgium's southern Hainaut province that were originally brewed to quench the thirst of local miners and, as with their Botany Weisse, squeezes plenty into a small package.

Thirsty Miner pours a hazy glowing golden with a white head and looks suitably saison-esque (which, now I say the word over in my head, would be a great album name if Teenage Fanclub ever decided to collaborate with the brewers at Dupont). It doesn’t hold back on the hay-like farmhouse aroma, which combines with clove-led spices and a peppery perfume. There's an impressively full wheaty body, a light lemon sweetness holding things together, and a nicely judged dry tug at the end. What's not to like?