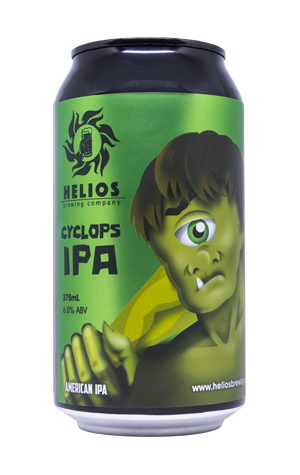 No, your eye is not deceiving you: Helios have finally released a year-round IPA you can buy in tinnies.

In previous years, they’ve released different versions of Cyclops IPA as a wet-hopped beer at hop harvest time, but this is something different – a core range West Coast IPA they’ve been working on for some time to get the recipe just how they want it.

With the malt fullness and the hop punchiness we’ve come to expect from Helios, Cyclops is a throwback to 2014, when Mash’s Copy Cat IPA (another of Helios brewer Charlie Hodgson’s creations) took out Champion Australian Beer at the AIBAs.

Instead of haze, there’s clarity; instead of light orange, there’s deep caramel; instead of fruit juice, there’s toffee and pine resin. That’s not to say there’s no fruit notes at all – a little citrus rind, a little pineapple, a little stonefruit – but you have to hunt for them among the brawnier resin flavours and syrupy malt. And then, of course, there’s the bitterness, which goes on a 20 year sea voyage worthy of an epic poem.

If you’ve only ever had low-bitterness hazy IPAs, the Cyclops may defeat you. But know this: If die we must, we will die a noble death.