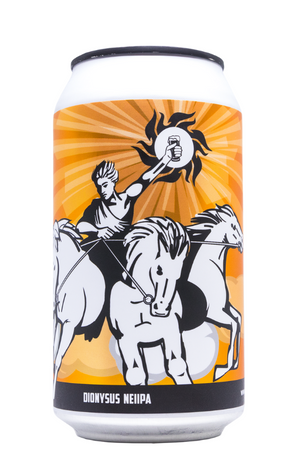 This year’s release of Dionysus is bittersweet; it’s Charlie Hodgson’s swan song as head brewer at Helios. Five years has gone by all too quickly, and Charlie’s spreading his wings and migrating south to take up another brewing post.

But if his departure is bittersweet, so is his departing gift: another evolution of this NEIIPA. It’s a bit of an outlier for the style, almost straddling West Coast and East Coast. It’s not bright, but nor is it very hazy. It’s oozing with sticky stone fruit and pawpaw like you might find in a West Coast, but with a softer approach. It’s thick and sweet and juicy – almost like the syrup from a tin of peaches – but with a distinct alcohol flavour that complements the fruitiness of Galaxy, Citra and Mosaic hops, making it almost like a fruit liqueur. And through the chewiness there’s a slowly building bitterness that doesn’t overwhelm, but doesn’t let up either, as the dry finish welcomes the bitterness with open arms.

If you were around for the early days of Helios, you may have been privy to Charlie’s hesitancy to go too far down the hazy IPA road; he’s always been wary of putting a beer off balance with heavy dry-hopping. But beers like this are evidence of Charlie being willing to lean further into this territory over the past few years while keeping his balance.

"Slowly reinventing what I do as a brewer ... trying to teach the old dog new tricks.

"Pretty chuffed with this one."