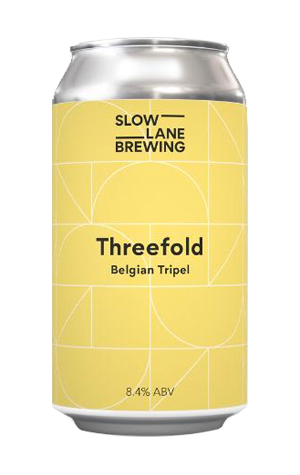 Threefold is Slow Lane Brewing’s take on a no-nonsense traditional Belgian tripel. Tripels are the strongest of the pale Trappist styles, first brewed by the Westmalle monastery in 1934 and now produced throughout Belgium and beyond. Australian made tripels are released at the rate of about 1.3 a year so, if you don’t grab one of these, you’ll be lucky to see another within the next nine months or so, I reckon.

Slow Lane’s Alex Jarman has gone for a 100 percent pilsner malt base and, although not stated on the label, I’m going to go out on a limb and say, like most tripels, there’s a bit of sugar thrown in to help dry out this big boy while bumping up the ABV to 8.4 percent. Like all of Slow Lane’s beers, Threefold went through an open fermentation and Alex has followed tradition once again by allowing secondary fermentation in package.

It pours hazy and lightly golden with a rocky head and lively carbonation. Lovers of big Belgians will not go home disappointed here with all the classic hallmarks checked off: Floral, fruity esters, clove-y phenols and honey’d malt aromas; spicy yeast and hop characters with a soft alcohol warmth and solid bitterness; grainy cereal malts open up more as the beer warms and give the impression of honey sweetness yet it actually finishes quite dry and the alcohol never overpowers.