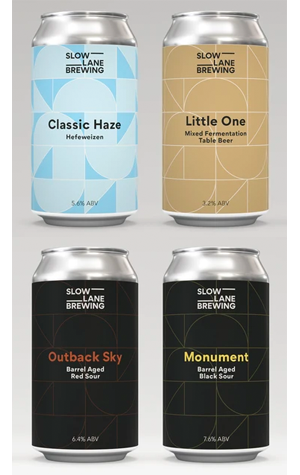 The first year of life is a wonderful thing. For some, it’s the joy of watching a little sentient mass of meat learn how to cry more and sleep less; for others it’s building a taproom and winning awards. For Slow Lane Brewing, the last 12 months have featured both, although less of the former and more of the latter – and I am hearing reports they are finally sleeping through.

To celebrate their first birthday, they've released a birthday quartet of beers. If you can think of a better way to celebrate such an occasion, I’d bloody well like to hear it! I’m being deadly serious; this is not a bit. Send a stamped, self-addressed envelope with your suggestions to Crafty Towers.

Birthday beer number one is Little One, a 3.2 percent ABV table beer. Table beers were first brewed to be a drink that everyone could enjoy with a meal. As such, historically, they used to be around 1 percent ABV or less so the kids didn’t get too rowdy. Modern table beers like Little One are generally closer to mid-strength saisons. This contains a hefty chunk of wheat and oats in the grist, which provide a bit more body than lower alcohol beers usually provide. There’s pineapple and bran on the nose, and a ginger beer like spice on the palate. Mildly tart from the lactobacillus, thirst quenching and very dry – as a light beer, you’ll struggle to find one more pleasant.

The second pale release is Classic Haze, a 5.6 percent ABV hefeweizen. Hefes are another in the litany of bizarrely under-appreciated styles in Australia so it’s always good to see a local one. They're yeast-driven wheat ales most notably known for the big banana and bubblegum esters produced by the yeast during fermentation. Classic Haze pours with a huge, fluffy head that crumbles away. All the classic hits are here: banana, cloves and every now and then a big old whiff of bubblegum. The malt comes across as a sort of vanilla sponge cake that’s perceptively sweet but balanced by bitterness and spicy phenols. Ja, das ist gut.

Outback Sky is the first of the two barrel-aged sours finally set loose on an unsuspecting public. The beer is Slow Lane’s take on a classic Flanders red, spending almost a year in ex-wine barrels. Such beers, as the name indicates, hail from the Flanders region of Belgium and are complex and vinous marvels of fermentation. Theirs was fermented with a Belgian yeast plus Brettanomyces, lactobacillus and pediococcus to a final ABV of 6.4 percent, so you should have a decent idea of what’s in store. Aromas of cherry and strawberry give way to an amalgam of Granny Smith, strawberry sherbet, vanilla, oak and leather with only a slight tannic astringency and moderate tartness.

At last, we come to the final beer in Slow Lane’s birthday celebration bundle. Monument is a barrel-aged black sour ale that started life as a kind of dark saison that was instead funkified with Brett and pedio and aged in a barrel for nine months before undergoing another month and a half of can conditioning. The resulting beer is dark, complex and checks in at 7.6 percent ABV. You’ll definitely want to hang around with this bad boy for a bit. It pours like 70 percent dark chocolate with a big tan head that dissipates quickly. On the nose is sarsaparilla, cola and black filter coffee. As the beer warms, it opens up with the dark malts throwing out a nice slice of chocolate fruit cake with a sour, dry finish.