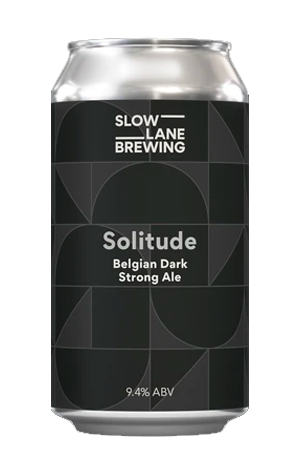 Not content with brewing the country’s best Tripel (IMHO), Slow Lane have set their sights on the biggest style the Belgians have to offer. Solitude is a 9.4 percent ABV Belgian dark strong ale and, although it was first released as part of the 2020 Carwyn Cellars Canvent, this is the first time it’s been available for the average punter.

Dark strong ales are probably most well known for Westvleteren XII, at one time regarded as the best beer in the world and still highly sought after. They are the most alcoholic and complex of the "clean" Belgian styles and are known for their rich malt sweetness, spicy warmth and dark fruit flavours. Basically, the exact thing you’re looking for during the coldest and darkest days of the year.

Like pretty much all of Slow Lane’s releases so far, Solitude is a straight down the middle, pitch perfect rendition of a traditional beer style. From the pilsner base to the dark candi syrup and open top, free rise fermentation, this is as close as you will get to any Belgian import.

Solitude pours a deep, coppery brown with a luscious tan head. On the nose is sultana and date, malt sweetness, peppery phenols with a hint of bubblegum. The malt and yeast complexity continues on the palate with the addition of dark bread, molasses and a subtle anise character. Solitude’s mouthfeel is sublime, with a velvety alcohol warmth, moderately high bitterness and a balanced sweetness that dries out wonderfully.