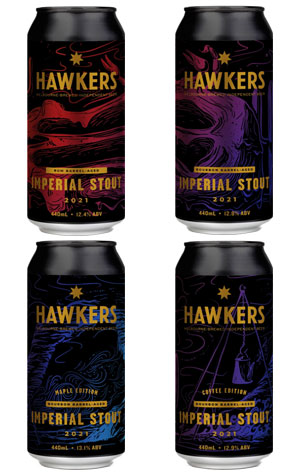 As life goals go, setting yourself a mission to become recognised as a leading brewer of barrel-aged imperial stouts is a pretty good one. And it's one the Hawkers team is approaching with gusto for winter 2021, releasing four different barrel-aged versions of said beer.

Three of them were aged in bourbon barrels, but let's start instead with the Rum Barrel-Aged version (12.4 percent ABV). It's the leanest, sharpest, and most spirituous of the quartet, with the rum less of the richer, deeper, darker variety, more the sort upon which you might base a Mojito. There's still plenty of chocolate from the base beer in there, it just comes delivered with a splash of something akin orange liqueur.

The straight Bourbon Barrel-Aged version serves up a deeper, fatter, and more intense experience. It's still boozy in nature (at 12.8 percent ABV) but this presents more through warmth than alcohol flavour. It's like a slab of calorific fudge whipped with caramel and vanilla in beer form.

Then there are the two "flavoured" versions of said beer, with Maple (13.1 percent ABV) a little sweeter on nose that the naked version, yet without being obviously maple-laced; take a sip, however, and the maple comes on hard. While it’s obvious and distinctive, it still works in well with the sweetness of the base beer and is probably my pick of the four.

Which just leaves Coffee (12.9 percent ABV) to round things off. It's not far from the OG bourbon barrel-aged version, with the coffee addition coming through rather subtly, especially compared to the impact of the maple syrup. If anything, it works to dry things out a little, completing one heck of a big collection that should help beer lovers through what's shaping up to be another wild winter in Australia...