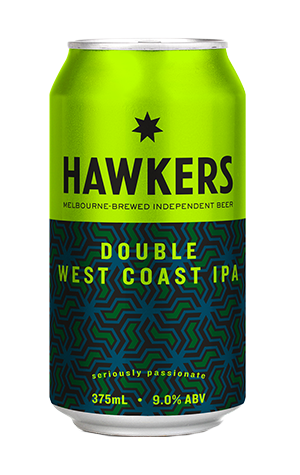 Hawker’s core range West Coast IPA has picked up a bit of a cult following – and a trophy for Best IPA at the Australian International Beer Awards – among those seeking a heavy dose of hops on a lean, tight base. With the Melbourne brewery never the sort to shy away from brewing big beers either, it follows that West Coast is the kind of core beer that deserves a souped-up version, which is precisely what this is here. Originally released in 440ml cans, Hawkers decided to make Double West Coast IPA a more regular part of the lineup from September 2021, now available in printed 375ml tins with the plan being to brew it a couple of times a year, presumably allowing it to disappear and be enjoyed as soon as it hits shelves.

As for what's inside, the Double version is almost as lean as its little sibling with just a touch more richness brought by the 9 percent booze level. Using the same hops as regular West Coast – Southern Cross, Simcoe, Mosaic, Northern Brewer – it’s a mix of dank resin, pine, grapefruit, floral notes and sherbety orange that’s all backed in by a hefty bitterness. In other words, it's the Hawkers West Coast you might already know and love, just made even punchier, bolder and boozier.