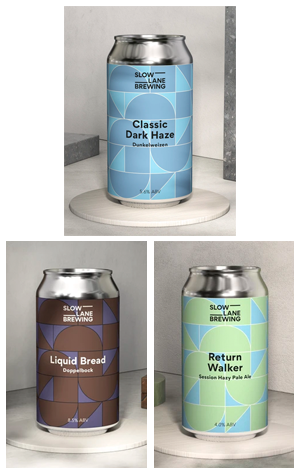 For most breweries, Oktoberfest is their one opportunity to bang out a classic crisp lager or a revitalising weissbier. The cops may not be able to stop a brewery releasing a Märzen in February, but few seem willing to risk it anyway.

For Slow Lane, Oktoberfest is just September. The beauty of releasing classic Euro styles all year round means celebrating the wonder of German beer is business as usual. And, thusly, the Botany brewery’s newest triple release consists of a dunkelweizen, doppelbock and NZ hopped hazy pale ale.

Dunkelweizens are the dark brother to the more common weissbiers and are almost never brewed in Australia. Classic Dark Haze is Slow Lane’s love letter to the rarely seen style and, once again, they’ve absolutely nailed the brief.

Like any good German wheat beer, a dunkelweizen is a mélange of volatile yeast derived compounds and malt. This German yeast strain throws out clovey phenols and banana esters like nothing else. Combined with the dark wheat and other German specialty malts, cracking a can of Classic Dark Haze is like taking a freshly baked loaf of banana bread out the oven. Then once you get stuck in, there’s bready pretzel, vanilla and a full, creamy sweetness and a finish with just the slightest sharpness.

Slow Lane’s second September 2021 release is the kind of beer that all the little barley grains hope to be when they grow up. A doppelbock is pretty much the pinnacle of beer as a food. Slow Lane’s aptly named Liquid Bread is 375ml of dark Munich malt marvellousness worthy of the monks of St Francis of Paula. Legend has it that the monks started brewing doppelbocks for sustenance during their long periods of fasting. At 8.5 percent ABV, my guess is they were likely snoozing 19 hours a day anyway.

Liquid Bread pours a deep dark brown with a fluffy, long-lasting tan head. I’ve been trying to think of ways to describe this beer without comparing it to bread but who am I kidding? It smells like a toasted dark rye sandwich or a fresh dark miche loaf. On the palate, there’s that traditional Munich dark and bready malt sweetness with a hint of boozy warmth.

The final part of this Slow Lane triple threat is about as far from Germany, geographically at least, as you could feasibly go. Return Walker is a 4 percent ABV hazy pale ale that positively reeks of Aotearoa. Using Riwaka hops sourced from a single hop farm at the top of the South Island, this is a showcase of this beautifully expressive hop brewed in the typical Slow Lane fashion.

If I’m drinking a beer because I know I’ve gotta write about it, I generally try not to read the can or any provided tasting notes before I give it a burl. And I’m not especially proficient at identifying hops from smell alone bu,t by gee, by jingo, by crikey, this beer smells like New Zealand.

It starts off all grapefruit, peach and passionfruit from the Riwaka but Slow Lane’s use of an English ale yeast lends a bit of spicy pear-like ester. With oats, wheat and chit amongst the grist, Return Walker feels bigger than the ABV would suggest and there’s a sturdy, balancing bitterness throughout.