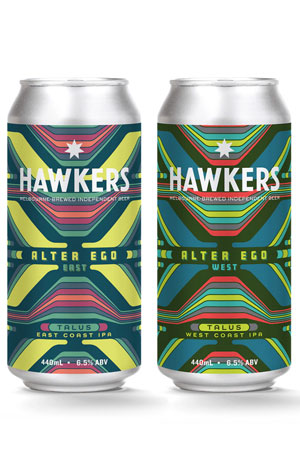 While I can't be certain it was the very first beer in which I experienced the hop variety that was to become Talus – back when it was HBC 692 – Hawkers' collab with Bale Breaker, Tom Needs New Friends, was certainly the one in which it took my palate in its firm grip and took it for a merry ride. Amid the flood of new varieties coming from the States, it might not command the attention of, say, Strata or Sabro, but it's up there as the most dramatically impactful. Breeders and retailers talk up all manner of characteristics for brewers to extract: pink grapefruit, citrus rinds, dried roses, pine resin, tropical fruits and sage among them.

Here, as Hawkers return to their Alter Ego series in which they use the same hop variety in an East and West Coast IPA to showcase just how differently it can present within different recipes, they talk up stonefruit and coconut undertones, but there's more happening than that – and, yes, the way Talus comes across as it flits from one side of the US brewing scene to the other is stark in its contrast.

In the case of West, you're hit with such a thump of vanilla and creamy oak, supported by a hint of grape and citrus that, with eyes shut, you mightn’t think it's a West Coast. No matter how dry and bitter the finish, that vanillin creaminess has your mind wandering towards memories of far cloudier beers. Give it time, however, and some lean, grapefruit-led citrus comes more to the fore, but otherwise this is far from the sticky-sweet fruit bombs of today, instead leading you deep into the forest.

Conversely, in the case of the light-blocking East – complete with a bigger, more persistent, and fluffier white head – while a creaminess remains, it sees the brewers entice much more of the fruitiness from Talus, albeit in a way that, on the nose at least, feels more angular and West Coast like. The oak is there, as is the dryness, but there's a coconut-pineapple mousse layered on top.

Whether you’ll be a fan of Talus will come down to your palate as it's an idiosyncratic wee bugger. One thing's for sure, however: put these two beers in glasses side by side and you’ll appreciate just how different styles and approaches can seriously alter the way a single hop variety presents.