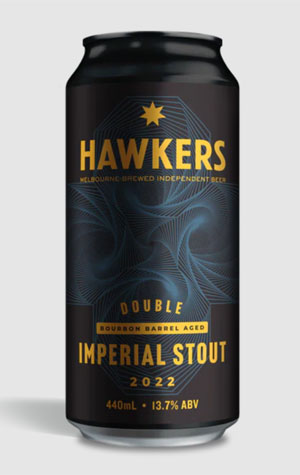 Thanks to a flurry of travel as we make up for lost time over the past few years, we're a little late jumping aboard the annual Hawkers imperial stout train. So why not just start at the end: with the denouement of the 2022 series? For the Double Bourbon Barrel Aged Imperial Stout the brewers did just that: aged their imperial stout in bourbon barrels, then emptied that liquid into fresh bourbon barrels and did it again.

And guess what: it certainly has plenty of bourbon character, but not so much in a boozy way (despite the 13.7 percent ABV), more in terms of intensity and depth of character. There’s a juicy, fruity bourbon-y sweetness that builds and builds, not to mention coconut aplenty, with the base stout – stripped of any bitterness or roast as well some body / head too – little more than the chocolate coating on the treat.

Prior to its release, Hawkers put out two more variants on the theme. In the case of the Cocoa & Vanilla Edition, it feels like they've taken the sort of characteristics you’d find in such a beer already and given them a wee scrub up. The result is still boozily imperial stouty, with the cocoa more noticeable than the vanilla, and comes across like a luxury chocolate ice cream in beer form.

As for the Maple Edition, well, let's take a step back. Sometimes, when adding a splash to the kids' brekkie, I do ponder as to whether maple syrup is the most satisfying foodstuff on the planet. It is, after all, sweetness delivered in every dimension, with depth, length and presumably some sort of spacetime axis too. It’s also potent as fuck, and that’s definitely the case here. You couldn’t enjoy the texture that caresses your palate without the hearty base beer in place but, really, everything is merely bowing down to the Canadian godhead.

We were a couple of weeks late tucking into their returning Party Starter hazy triple IPA, but it's still around and fresh, and you can read about it here.