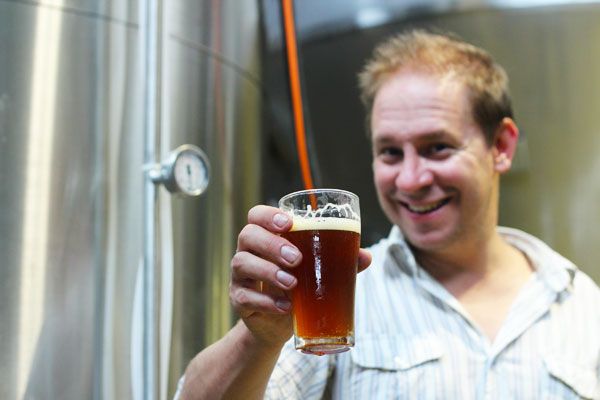 As the deadline for voting in this year’s Hottest 100 Aussie Craft Beers draws ever closer, we’ve just got time for a look at the stories behind a couple more of the beers that have proved extremely popular with drinkers in past years. Today, it’s the turn of a beer now in its teens, the grandaddy of the Melbourne craft beer scene, and one whose enduring popularity shows no signs of slowing.

We’re talking, of course, of Mountain Goat’s Hightail, born in Dave Bonighton’s home brew set up back in the early 90s and the fuel to many a wild backyard party before becoming the brewery’s first beer. You can check out Dave’s top five of 2010 for The Local Taphouse poll here, make your own selection here (you’ve got til midnight on Sunday to do so) and read on for the story behind…

What was the idea behind the beer?
“It came directly out of my time living in the States. I spent two years in Baltimore in the early 90s and enjoyed drinking Liberty Ale from Anchor Steam (even though I wasn’t old enough to drink legally over there). Then I came home and saw there were two kinds of beer – heavy and light – and both tasted the same. I knew there could be beer that wasn’t just yellow and poppy and tried to hide its malt and hops. The beers I was drinking in America had been showing these off and flicked a switch in me.

“I’d always dreamed of making beer for a living and Cam (Dave’s mate and co-founder of Mountain Goat Cam Hines) had done a trip through Vancouver and the West Coast of Canada and spotted the business opportunity. He said: ‘Why don’t we have microbreweries in this town when we love good coffee and wine and bread?’ so we ended up with the napkin deal that I would fill a warehouse with beer and he would try to empty it.

“Hightail became my effort to create something similar to the beers I’d enjoyed in America, rather than a bland lager. I wanted something hoppy and malty and ended up with something that’s definitely a mongrel, using UK and Australian malts and US hops – originally Cascade, with some Australian Galaxy hops in there now as well.

“The first homebrewed version was done in 1994 and we just used to have it at parties [at Dave’s house]. We held them from 1994 to 1997 and started putting together a mailing list, which in those days was snail mail, but by the time we had a license there were a few hundred who were receiving our newsletter and we’d sold a few t-shirts.

“The first commercial brews were done at the Old Colonial in Geelong and then at Grand Ridge, where I was head brewer for a few months. Then we moved to Crown Street. It first went on tap at the GB in Richmond and it took off from there.”

Why do you think it’s proved so popular?
“It serves a purpose because it represents a different part of the beer market that at that time wasn’t serviced at all. It was our flagship beer [Pale followed in 2000, Surefoot Stout in 2001] and our biggest seller right up until last year [when Steam Ale took over]. To me it was always a Melbourne beer, because it was a little bit darker, If we had been in Brisbane or Perth it might not have worked as well. It’s a bit more wintry; it suits Melbourne.”

You now make a Rare Breed Double Hightail that is proving exceedingly popular among craft beer drinkers. What’s the story there?
“We first brewed it for our tenth birthday party, which we wanted to mark with a special beer. It was made using exactly the same recipe as normal Hightail but with half the water. It’s like a short black!

“Now it’s hopped a bit differently because we wanted to lift it. We’ve thrown in some Galaxy because we love the idea of using a lot of hops. And it’s probably my favourite of all the beers we’ve made in the past year.”

Hightail’s available pretty much everywhere all year round. A new batch of Double Hightail in bottles is hitting shelves from today while it’s also pouring through fresh hop flowers in Randy the Hopinator at the brewery this Friday.