The number of Australian beer podcast seems to be steadily on the rise. One of the newest we've come across goes by the name Brunswick Beer Collective. Their social media feeds suggest they're getting fully into the swing of Good Beer Week so it seemed the perfect time to find out a little about the trio behind the show.

They are Jeff Chee (above centre), Paul Kristoff (above left) and Chris Shorten (above right) and are featured in our latest Podcast People article.

Who are the voices behind Brunswick Beer Collective?

We are three idiots who, in Jeff's words, are "stumbling down the craft beer rabbit hole". No seriously, we're just big fans of craft beer, who don't profess to be experts, but who just enjoy being part of the scene and felt we could contribute something back.

Paul and Jeff: It was all Chris' idea.

Chris: Building on Paul and Jeff's statement there, it was during a conversation at very drunk Australia Day after party, when after listening to Paul and Jeff bang on about craft beer, I suggested maybe we should record it. Although I'll admit, when I word it like that it kind of sounds like a marriage proposal.

Do you regard yourselves as authorities on beer or enthusiastic pontificators?

We are most certainly the latter. We kind of know what we are talking about, but thankfully Wikipedia and Ratebeer are always close by to fill in the gaps.

Who has the worst Untappd addiction? (Your profiles suggest some serious afflictions!)

Well, Chris isn't on Untappd, but between Paul and Jeff, Jeff has been using it for longer, but Paul is certain he's almost caught up

From what we can see on Untappd, one out of every nine checkins at the Alehouse is either Paul or Jeff.

When we did our first episode we had pages upon page of notes, but since then we have scaled it back to a brief running sheet on the day of recording. We also don't decide on the beer until the night, or if Jeff looks up Now Tapped during the day. So overall we have a very rough idea of things, and then we just hope we don't cock it up.

Sometimes more than three of you appear: how do you pick your guests?

For the guests so far, they've been some fellow hard-core craft beer drinkers, but since launch we've had a lot of people approaching us to appear. We have some big ideas on who will appear next.

Is there an intention to invite brewers or other beer world people onto future shows?

It's not something we've specifically aspired or planned to do, but if a brewer would like to come and chat with us, they would be more than welcome.

If you did, who would be your dream guest? 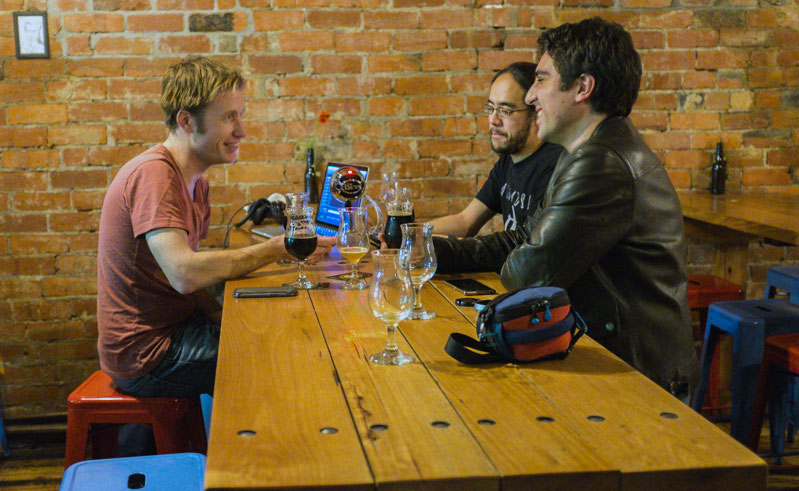 We talked about this. We think we would love to have the two Mikkeller brothers on together. It would have to be on the same night, and the Alehouse would probably need to implement a plastic glasses policy. Failing that, we would probably settle for one or the other.

Our audience is certainly the craft beer lovers, but it's also the people who love the things around craft beer, or those that just see the fun side of bars, pubs and restaurants. We hope we cast a pretty wide net and the show is fun for anyone with ears.

How do you choose which beers to sample "on air" or for the show?

Our first priority is to look at the tap list and ask ourselves, "What haven't we tried before?", because we really want to have a fresh take on things as we share our thoughts, and of course our ignorance, with our listeners. But while we're always looking for that next Untappd badge, we're more than happy to revisit a beer we really enjoyed.

Have you found there's an ideal beer (or beers) to have while in action?

We have more an open door policy, we'll drink any beer, at any time, for any reason. Although we probably draw the line at vending machine beers. And VB. Definitely no VB.

And, given you're a collective, is there a beer that unites the Collective consciousness in mutual adoration or are you fiercely independent in your top tipples?

We all have different views on beer, but we're not sure if there's any one beer that can unite the three of us. Chris still has a fridge full of Coopers Pale Ale, Jeff has a house full of nothing but the Alesmith Speedway Stout, while Paul's wife keeps replacing the beer in the beer crisper with vegetables. Paul is a little upset by this.

We use a Blue Snowball podcast microphone combined with a Macbook Pro and at the moment Garageband. We wandered around the bar a lot to try and find the best place to record, but we settled on the quieter side room of the pub. Of course, we welcome an audience if they're in the neighbourhood.

Where can people find the BBC podcast?

Our website is www.brunswickbeercollective.com, and you can also find us on iTunes, Facebook, Twitter, or Instagram. We also encourage listeners to send us their suggestions and ideas (or if they'd like to be a guest on the show). Paul and Chris also suggest sending any abuse to Jeff.

Well Chris is a huge fan of Serial, but there is definitely beer in that. Quite a lot of questions though. Paul still thinks that the Ricky Gervais show is one of the best podcasts ever, if not just for Karl Pilkington, and after a few beers Jeff doesn't tend to be awake long enough to listen to anything. Do you like exploring the links between drinks? Past AIBA Best Media winner James Atkinson's podcast Drinks Adventures looks at beer, wine, and spirits, and the collaborations between those world. read on