If you live in Melbourne, like going to pubs and have an eye for a bargain, chances are you’ll be aware of The Happiest Hour, a website set up by a pair of students in 2004 with the intention of telling you where to find cheap beer, wine, cocktails and food in the city’s pubs and bars. Featuring special offers, meal deals and the like, it has the power to make every day Tightarse Tuesday. And, with one of its founders, Chris Canty, being a beer writer, there’s also a rating system for offers that indicates whether the beer on offer is a good craft one or general megaswill. For example, Biero’s $5 Pint Nights get five stars as it’s for top quality beers but a night where the offer is for, say, Carlton Draught, might only rate a two or three.

As of today, it’s available as a free iPhone app – and should be ready for Android phones in February. Using your iPhone’s GPS, it will locate nearby bars and indicate happy hours by type – beer, wine, cocktail or meal deals – and allows for user-generated content too. You can add new bars or correct listings through the app – even submit photos of the specials board. 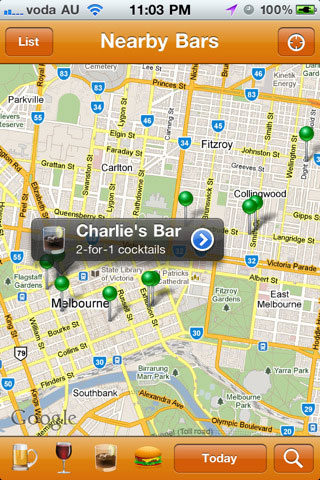 Chris says: “Venues and members of the public hand us their happy hours but they change so fast that we can’t keep up. We’re hoping that with user moderation through the app we’ll be able to keep it up to date as people can say whether an offer does or doesn’t exist when they go to a venue. Pubs can also add their own specials, which will be good if they’re doing one day offers.”

As well as rating the offers by the quality of beer, they also give ratings for a venue’s parma, with five stars only given to the biggest and best.

Chris says it’s totally free – there are no paid ads – which is in keeping with The Happiest Hour’s history. “We’ve never made a cent from it in seven years,” he says. “It’s all for the people!”

If you own an iPhone, head here for the download.