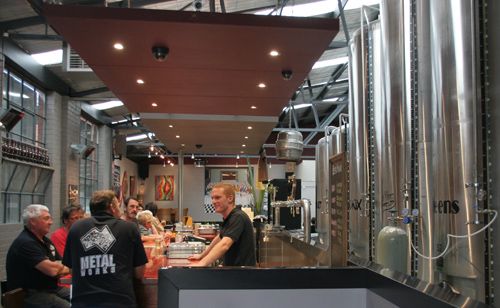 The ongoing efforts to help Queenslanders recover from the floods continue to attract support from the Aussie beer industry. After last week’s fundraising drives from the likes of Stone & Wood and True South, they keep on coming. We added details of the White Rabbit / Giant Steps / Innocent Bystander “Pints and Pizza” night to the diary yesterday – head to the restaurant in Healesville tomorrow (21/01) and they’ll give every penny from sales of pints and pizzas to the Relief Fund – and have heard of a few more since.

In a similar vein, 2 Brothers in Moorabbin is hosting a Beerathon on February 3. Kicking off at 4pm, all sales of pizzas and beer will go to the Red Cross Appeal, while there will also be a fundraiser raffle, live music from 7pm and a charity jar for anyone wanting to make additional donations.

Meanwhile, quality beer club, the Beer Masons, is offering the chance to win a fantastic 100 bottle pack, including beers from De Glazen, Avery, Holgate, Lagunitas and Bridge Road, for anyone who donates to the Premier’s Appeal. All you have to do is make a donation, request an emailed receipt, then forward that receipt to floods@beermasons.com to be entered into a draw. Full details can be found here.

We’re also awaiting details of a pretty special sounding Mikkeller-themed beer tasting at Chapel St Cellars that may involve an auction to raise funds for the appeal. Will bring that to you as soon as it’s confirmed. In the meantime, if you know if any others, email crafty@craftypint.com and we’ll add them to the site. Cheers.