An invitation to contribute information on the Australian Sparkling Pale Ale style to a show on America's Brewing Network led one Sydney man on a voyage of discovery. Home brewer of 18 years Peter Symons (pictured above at the Noel Butlin Archive in 2012) decided to delve further into Australia's brewing past, not so much into the people, breweries and businesses that have been covered before but into the beers that were once brewed and have been lost.

His journey took him to libraries across the country, into secretive archives, to London and, ultimately, led to Bronzed Brews, a new book that details much of the history he found. More than that, however, it sees him recreate 42 recipes for lost Australian beers for home brewers to bring back to life. And, after an unexpected discovery in London, he's put in train a process that could see an old Melbourne yeast brought back into commercial production.

Here Peter tells of of the dogged pursuit that led to Bronzed Brews.

How did Bronzed Brews come about?

Peter Symons: Well, way back in January 2009, after doing some very rapid initial research for the Australian Sparkling Pale Ale style for [world famous home brewer and author] Jamil Zainasheff on the Brewing with Style show on The Brewing Network, I wondered why there was so little written about historical Australian beer.

That, along with being a long time reader of Ron Pattinson’s Shut Up About Barclay Perkins blog, which has Let's Brew Wednesday historic beer recipes, whetted my appetite to investigate the situation in Australia.

There are plenty of brewing histories typically covering the founding of the brewery, acquisition of rival breweries, eventually being taken over by a larger predator, with the closure of the founding brewery (sooner or later), with the consequent loss of the variety of beers being produced.

These histories usually have lots of stuff about people, dynasties, and stories aplenty describing contemporary events. If you are lucky there are some architectural details about the brewery and perhaps a description of the plant but usually nothing of significance about the actual beer being produced such as types, flavours, colour, taste etc.

My book has taken a brewing centric approach rather than being a history of breweries per se. While I have included historical context, mainly contemporary brewery descriptions, adverts and illustrations from newspapers, my overall aim has been to recreate the recipes as accurately as possible, by using primary sources, i.e. brewing records.

Bronzed Brews starts by covering the period [from] early 19th Century to mid 20th Century both for the ingredients: water, malt, hops, sugar and yeast, and then the common brewing processes (malting to dispense) for the Sydney breweries Tooth and Co, Tooheys, and Reschs. This information provides the foundation for the subsequent recipe chapters.

How did you go about compiling the book?

PS: In essence I tried to utilise all of my work travel opportunities to visit libraries and archives around Australia and the UK.

Tracking down the primary sources was a challenge. Think of it as a voyage of discovery where you have a general idea of what detail you want to acquire: actual brewing records and details of processes but the information is often classified by librarians and archivists in very vague and broad terms. 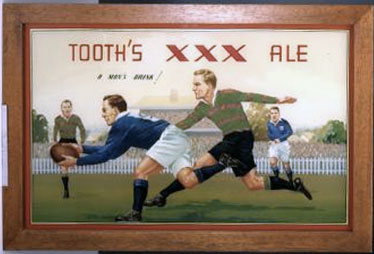 Then, in November 2012, due to a lack of funding my day job contract was cancelled, so I had a bit of a sabbatical and decided that I would intensify my researching activities.

I found out about Special Collections at the SLNSW, notably a series of Tooheys Goods to Arrive books from the early 20th century, which were accounting related but included types and origin of ingredients and purchases of plant. To access this material you have to hold a special Gold Card – and sit in a roped off area that has rules such as weighing the books out and back in!

Archives and libraries tend to be quirky places – all have slightly different rules about how you access the materials – white gloves, book rests, time of access, photographic permits etc.

Then it was back to Canberra, in December 2012, where I spent three more days in the Noel Butlin archive again to go through even more boxes. And the thing with getting a box is you never know exactly what has been placed in the box so all sorts of unexpected information pops up.

Later, in early 2013, I met with [Hahn founder and James Squire brewmaster] Chuck Hahn who, along with [former Lion head brewer] Bill Taylor, facilitated access for me to the Tooheys archive at the Auburn Brewery for four days worth of mouldy brewing book sorting that provided a range of primary records from 1913 to 1978, which helped complement the Tooths information from the Noel Butlin archive.

I must also mention the invaluable resource that is Trove; I spent many evenings tracing brewery descriptions, adverts, and people to complement the recipes.

Were there any particularly memorable discoveries along the way?

PS: One of my major discoveries was the existence of Melbourne No. 1 Ale yeast in a yeast bank in the UK. Bronzed Brews details many early 20th century Tooth and Co recipes and it is highly likely that Tooth’s used No. 1 yeast for their ale production as Grove Johnson [author of The Australian brewing student's manual] was their brewing analyst at that time.

I was in London, in March 2015, to give a paper at a technical conference, and had a few spare days. (One day I went to the London Metropolitan Archives but I will leave that for another time.) I had arranged before leaving Australia to take the Truman’s Brewery tour.

So on a brisk Saturday lunchtime I am on the tour with two other guys. Jack Hibberd was the guy leading the tour and was very knowledgeable. During the tour I asked a lot of questions, which were mostly answered. When it came to the yeast that they were using he described the effort that they put in to find the authentic yeast (which you can read about here).

In short, when the original Truman’s brewery closed in 1958, several strains were banked at the National Collection of Yeast Cultures (NCYC) and from these they eventually selected two ale strains for their new brews.

This snippet of conversation when mixed with several pints of the excellent Truman’s Runner got me thinking. On returning to my accommodation in Waterloo, a warming pie and pint of Fuller’s ESB, I fired up my laptop and went to the NCYC site; my first search term was “Australian” and "BINGO!", top of the list was:

Subsequently, I emailed Chris White from White Labs explaining what I had found and asked whether White Labs could source this yeast and make it available to home brewers. We had some follow up conversations at NHC15 in San Diego and, long story short, WLP059, Melbourne Ale yeast, was recreated. Many thanks to Chris White and Kara Taylor.

White Labs launched Yeast Vault in December 2015 which allows home brewers to vote for the strains that should enter production, WLP059 is on the list! Hopefully, 250 US home brewers will vote for it so that this strain will become available to Australian home brewers.

I received a small sample of WLP059, which I boosted with a starter, and it is now fermenting a 1916 Pale Ale recreation. It will be interesting to see what the resultant flavour profile and attenuation turns out like.

So there you have it: from a request for a spot of research to an ever-widening delve into the past comes not only a unique look at Australia's brewing past and an attempt to help people recreate that past, but now, maybe, a chance to bring a piece of Australian beer history back to a form of commercial reality.

You can find more information on Bronzed Beers here.

And you can buy it online from Lulu here.