There are few shipments from overseas that excite local beer aficionados as much as those from De Molen, the Dutch brewery that's one of the highest rated in the world. For one Aussie beer lover, however, things have moved well beyond waiting for their beers to arrive – he's ended up working there.

Indeed, from homebrewing in Victoria to working at De Molen, James "Jimmy" Krekelberg (above left and right at Stewart in Edinburgh, centre at De Molen) has come a long way in a couple of years. The keen homebrewer took a leap of faith when starting his overseas travels in Edinburgh, then landed a gig at a Scottish brewery and hasn’t looked back since.

Here, in the latest in our Aussie Exports series, he shares his insights on the craft beer scene in the Netherlands, why Australia is doing pretty well for itself, and when is the best time to visit De Molen.

How are you involved in beer in the Netherlands? How did that come about?

Jimmy Krekelberg: I'm a brewer at De Molen Brouwerij. After my visa had expired in the UK, I visited some family in the Netherlands on the way back to Australia and really liked it here.

I thought: "I wonder if maybe I could come back to the Netherlands to work."

Thinking of which breweries to look at, one main one popped into mind: De Molen. I loved what De Molen did so, once I got back home, I got in touch with one of the owners and they said they potentially had a position opening up in a few months. After a few emails, a phone call and looking into what visas I needed... the next thing I knew I was on a plane heading to the Netherlands!

JK: I was a mechanical engineer working on huge machines, such as power, gas, paper – that sort of thing. Looking for a bit of a career change, an opportunity came up and I left Australia in 2012 to move to Scotland on a two year working visa.

Being a keen home brewer, and a huge fan of Australian craft beer and just falling in love with the whole brewing world, I thought if I'm moving to the UK I'm definitely going to work at a brewery! I contacted several breweries in Scotland and Stewart Brewing in Edinburgh got back to me with a position as they were about to go through a massive expansion of the brewery.

JK: Only as a keen home brewer. I built myself a nice little full stainless steel brew kit and even got myself on ManSpace TV with it! I also got to attend the Australian Craft Brewers Conference last year, which was great to be a part of.

JK: Originally, I thought I'd only be over in the UK for two years, then come back to Australia and try to get a job in an Aussie brewery with my bit of UK experience. I never thought I'd be back over here working in Europe again!

How does the beer scene in the Netherlands differ from home?

JK: I would say it's quite similar to Australia, actually. Still relatively young in comparison to the US and the UK, yet it is growing very rapidly. A lot of small breweries are starting to pop up all over the place here; the big guys are definitely noticing and have started to acquire some of the bigger craft breweries too.

The supermarkets have only really just started to stock a few craft beers on their shelves, but you can always find all the classic Belgian beers quite easily. It's funny here, though: the new wave of craft beer drinkers / brewers don't really look to the Belgian beers at all, they always say: "Ahh, that's what my dad or grandpa used to drink!" But if I see a six pack of Duvel for 5.50 euros, then yes, please!

The supermarket down the road from me even had bottles of Rodenbach Vintage for under 5 euros at one stage...

JK: The craft breweries I have worked in have both gone through rapid expansions so I have been fortunate enough to see both ends of the scale from a smaller, more hands on, 25HL brew kit up to a 60HL fully automated brewhouse.

JK: I think, in comparison with Europe, Australia is doing quite well in the craft beer scene. We are quite diverse in the different styles as well as a lot of experimental stuff coming through now.

One thing I have found, and I think due to our alcohol tax laws, is that Australia produces some of the best 4 to 5 percent ABV pale ales around. Hopefully, one day we can get some more relaxed tax laws relating to craft beer and start seeing doubles, triples and imperials become more mainstream.

Is there much knowledge or understanding of Australian beer in Europe?

JK: In the UK, you can generally come across a stubbie of Coopers Pale Ale; I even brought a case to celebrate Australia Day with the boys in Edinburgh one year and cooked them up a few homemade dimmies [dim sims]! Most people in the UK beer scene have heard of a few of the larger craft breweries in Australia, but generally in the specialty off licenses you may only find one or two bottles of Australian craft beer.

Most people that I talk to in the Netherlands haven't heard much about Australian beer at all, but I'm always getting asked what it’s like over there. It's nice to be able to talk about how well the Aussies are going and just how diverse the beer scene is in Australia.

JK: My visa is due to expire here in February / March next year. So who knows what will be next!

But hopefully I’ll be back home in Victoria somewhere.

JK: It would probably have to be the day I visited Rodenbach brewery. One of my favourite things to do is to go and visit other breweries or distilleries.

When I was in the UK, I organised a big weekend trip to Belgium with the guys, which was amazing. At De Molen, every couple of months we'll knock off early on a Friday, the boss will pull up in a minivan, and we'll all jump in to go visit a brewery somewhere.

What tips do you have for people visiting your part of the world?

JK: If you're heading out my way, De Molen is only about an hour out of Amsterdam. We have a cool 20 tap bar that's in an actual old windmill, where you can also grab a bloody good burger!

Or, if you're in the Netherlands on September 23 & 24, we have our international beer festival at the brewery with more than 6,000 people turning up over the two days. In Amsterdam, one of my favourite bars to check out is definitely In De Wildeman.

Thanks Jimmy. Talk about grabbing at life's opportunities!

You can find other Aussie Export articles here. For the next couple, we're off to New Zealand and Slovenia.

If you're an Aussie doing fun things in beer overseas – or know someone who is – drop Kerry a line. 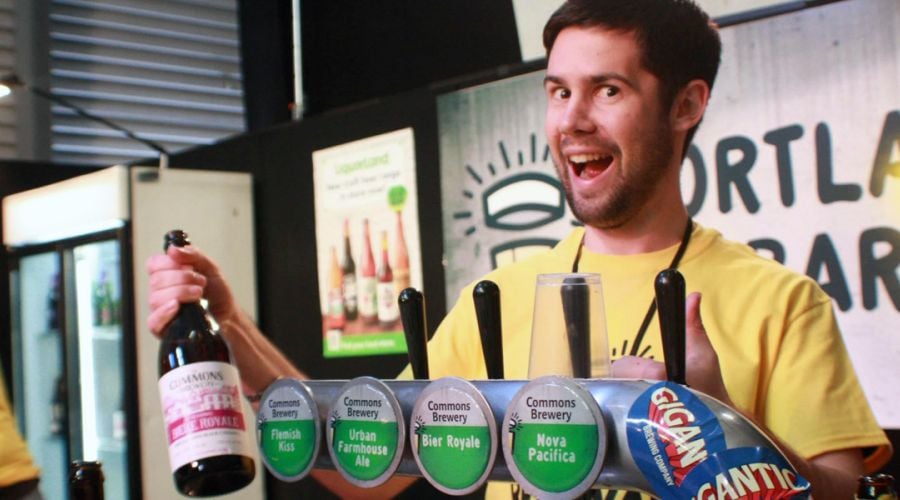