When asked what Petr Petruzalek brings from his home in the small Czech town of Merklin to a small brewery in Brunswick, he stretches his arms out wide and points to the two guys sitting next to him.

“My friends are here!”

Those two friends (and translators) are the owners of Brunswick’s Foreigner Brewing Company, Peter Denison and Mira Koman. The pair also hail from the Czech Republic, although Peter has been here since he was five (which helps explain the second "e" in his name).

For two people who are just starting out as professional brewers, Petr (pictured at the top) is a useful friend to have on hand. He’s currently the head brewer at the Blue Star Brewery (Modrá Hvězda in Czech), one of the most awarded craft breweries in the Czech Republic. Prior to that he spent more than two decades working at one of the world’s most famous breweries, Pilsner Urquell.

Peter and Mira were introduced to Petr through their respective families, and all three met when Foreigner was still little more than an idea in the heads of two homebrewers. So, at the start of 2015, Peter and Mira offered to help fly Petr over to Australia to assist their transition from homebrewing into pro-brewing.

In a somewhat unusual example of cross-continental craft beer exchange, Petr helped the Foreigner team with their recipe design and has been returning to Australia each year since.

While his close friendship with Mira and Peter is obviously an important influencer on his decision to return, Petr speaks passionately about how much he enjoys the Australian craft scene.

“When I was first here, we went to the bottleshop every day just to try all these different styles of beers,” says Petr. “[The breweries] that I liked the most were quite close to each other in the north of Victoria, so we made a trip out there to visit them.”

Petr lists the likes of Bridge Road Brewers, Bright Brewery, Black Dog and Holgate as immediately attracting his interest. In particular, it was the hop-forward pales of each brewery that really excited him about Australian craft.

“I was so glad that they were close to each other so I got to visit them all,” he says.

“They made beers with beautiful balanced aromas and bitterness which reminded me a lot of a well-made beer in Czech. But in Czech you’d be talking about a lager – here in Australia they were ales.”

Having started his apprenticeship at Pilsner Urquell in 1981, it’s safe to assume that few people visiting Australia are as well versed in lager as Petr. He brewed there until 2003, having taken just two years off for compulsory military service.

The last two decades of the 21st century saw profound changes sweep Petr’s homeland, changes that were reflected on the brewery floor. In 1989, the “Velvet Revolution” brought an end to four decades of communist rule over Czechoslovakia. Then, four years later, the country itself split into two and the Czech Republic and Slovakia were born.

“That was a change that you could never be ready for,” Petr says, smiling. “Obviously, the communists weren’t ready and neither was anyone else.”

Prior to 1989, Pilsner Urquell was under national control and those running the brewery were typically political appointees. While the fall of communism did bring many changes to Urquell, the reforms were nothing compared to those that occurred around the turn of the century.

In 1999 SABMiller took control of Pilsner Urquell, and it was in the immediate aftermath of that takeover Petr argues some of the most sweeping changes took place.

“First there was large investment into new technology,” Petr says. “So a lot of employees were replaced by computers. But that was a process of the time and modernisation into major breweries had become a necessity.

“But when I left in 2003 it bothered me that the professionalism wasn’t as important as it had been. For me to sit there and control a computer, they didn’t really need me to be an expert brewer – they had programs that anyone could have controlled.”

As part of AB InBev’s purchase of SABMiller, the world’s largest brewery was forced to sell off some of its breweries in order to obtain approval from competition regulators. That included Urquell, which Asahi is currently in the process of buying.

“What hurts me most about [that sale] is that when I trained there I fell in love with the craftsmanship of making beer,” Petr says. “But sales like that make it really clear that those business people involved in the sale don’t care at all about the craft. It’s just about money.”

For Petr, the contrast between Pilsner Urquell, and where he is brewing now (along with Foreigner Brewing) couldn’t be starker. Blue Star Brewery is in Dobrany, a small town within the Pilsen region, some 10km from the brewery that shares the same name.

“When we work in a small brewery you can really take care of the beer at every step of the way,” says Petr. “You can take as long as you need to get to the goal of a really well made crafted product.”

To Australian beer drinker's eyes, Blue Star could probably best be described as a brewpub. Pouring 14 unique beers at any one time, it’s also a restaurant, hotel and tourist stop all rolled into one. Although (unsurprisingly) lagers take up plenty of tap space, Petr also brews his share of ales, ranging from IPAs to wheat beers.

Despite the Czech Republic having an international reputation for its beer, Petr argues that compared to Australia, the beer culture in Czech is still quite conservative. He says that while things are changing, craft beer is still only about two percent of beer sales. Most of that two percent comes from small brewpubs like his.

“When I started at Blue Star in 2003 there was maybe 40 small craft breweries in the Czech Republic, now there is maybe 350,” Petr says.

While a small craft market share and a rapidly growing number of breweries might concern some (and sound very familiar to Australian brewers) Petr isn’t too worried. Having already moved to a much smaller brew kit when he left Urquell, Petr is looking to go smaller again.

Joking that he is tired of having to cycle 15km to his workplace in Dobrany, Petr has decided to start his own brewery in his home town of Melkin. Slated to open either late this year or early next, Melkin Brewery will be the first in the town since 1951.

For his first foray into owning his own brewery, Petr’s ambitions are humble. Having already worked in one major brewery and tiring of the workload he must worry about at Blue Star, Petr hopes Melkin will be a change in pace to what he is used to.

“I don’t want to expand. I don’t want to push batch after batch out into the market," he says. "I do want to work on new beers though. [I also] want to help educate people about good beer.”

And, even once his own brewery is up and running, he still plans on returning annually to Melbourne to brew with his mates.

You can find Foreigner in Factory 12, 102 Henkel Street, Brunswick. 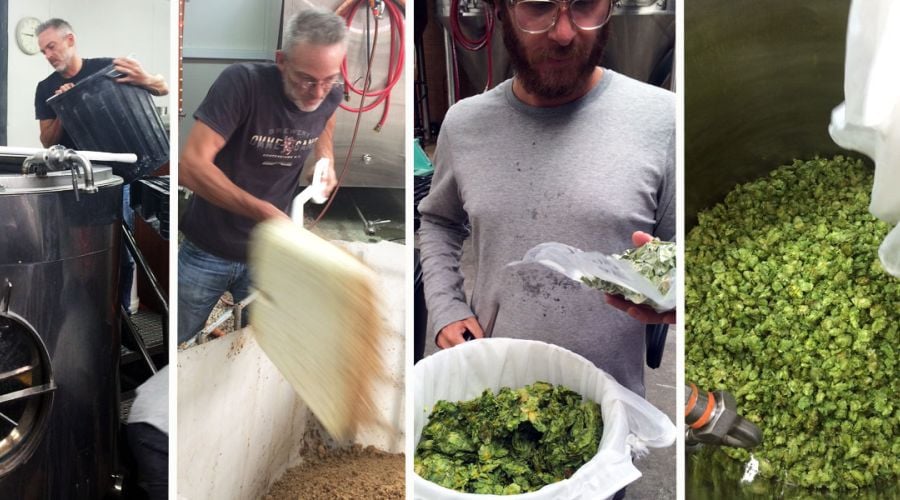