Of all the possible routes one can take to becoming a brewer, spending more than seven years as a volunteer aid worker in some of the most remote and dangerous parts of the world must be among the most unconventional. Yet, for Jacob and Deb Newman of Mittagong’s Eden Brewery, located in the picturesque Southern Highlands of New South Wales, starting their own brewery seemed like life’s most logical next step.

Aside from giving them the chance to settle down and enjoy a much needed – and well deserved – beer, it has allowed them to continue supporting the ethical issues that matter to them the most, albeit in a slightly different way.

Since their opening in January of this year, 10 percent of the brewery’s profits have been donated directly to Oxfam clean water projects, something the Newmans hold close to their hearts.

“When we were volunteering, especially in Papua New Guinea, we saw firsthand the need for clean water,” says Jacob. “We were going there with medical skills, staying on a hospital ship and living as deep bush as you could get. But most of it was treating problems related to unclean water.”

That idea was further enforced in Juarez, Mexico – one of the world’s most dangerous cities – where the pair helped build an aquaponics system for a local orphanage, and again in Darwin, working with Indigenous youth.

“It turns out you can save the majority of people in the world if you just give them clean water,” says Jacob. “It’s so simple!”

Upon their return to Australia, the pair searched for the perfect location to start their brewery. The nature-rich landscape of the Southern Highlands appealed to them both, and with funding from friends and family they began the long process of establishing their own Eden. Giving the brewery that name reflected their commitment to protecting nature, but also the idea of bringing brewing back to its roots, using it as a community-focused tool for social discussion on important issues.

“The real motive of the brewery is to create a place for people to come and have a good time, around a good glass of beer, and to do good with it,” says Deb, echoing the motives driving the founders of other fundraising brewing companies such as Brewmanity and The Good Beer Co.

“We think this way we’ll have a greater influence in promoting Oxfam. Plus, it’s a clever way to provide someone with a drink while you enjoy one yourself – a glass for a glass.”

As for their environmental impact, Jacob and Deb are committed to doing good there too.

“Since we can’t install solar panels, we opt to pay double our electricity bill to subsidise that through renewable sources. Officially, our energy comes from coal, but since we’re paying more, they can use that to build hydroelectric dams or something similar,” says Jacob.

“Someone, somewhere is using green energy instead of coal because we’re paying for it here. It’s kind of like planting a tree to offset your carbon emissions.”

Deb adds: “We hope that we’d be rewarded for our practices by the people that share those same kinds of values.”

So far, that seems to be the case. Just six weeks after opening, they had almost worked through six full fermenters of beer. They’ve also been warmly embraced by the rest of the businesses in the community, appearing on tap at the Mittagong RSL, entering collaborations with local wineries and even having a meat pie named after them. Across the road at the Gumnut Patisserie, the Eden Pie is available for purchase, made with the brewery’s Giant Redwood Imperial IPA.

According to Jacob: “It’s the best pie I’ve ever had in my life – and not just because my beer’s in it!”

The rest of the beers – the ones that don’t end up in pies – share similar traits. In keeping with the theme of the brewery, they’re all named after trees. They’re also usually slightly unconventional styles, a conscious decision on Jacob’s part.

Perhaps the most unique of these is the Birch Wit, a Belgian style brewed with sunflower seeds and oranges.

“It was the first beer I ever made. As an eighteen-year-old Texan, I realised that I couldn’t buy beer, but I could buy the ingredients to make it,” he says.

“My buddy and I went on a drive for inspiration and we passed a field of bodark (bois d’arc) trees, which produce a fruit called a horse apple. We were going to make those into a cider, but it turns out they’re possibly poisonous to humans, so we abandoned that plan. The next thing we drove past was a sunflower field, and that’s where the idea for this beer was born.”

It hasn’t been the Birch Wit, nor the Giant Redwood Imperial IPA, that have been Eden’s biggest sellers. Rather, it’s a resurrected style – the Kottbusser that heralds from Germany – made with wheat, oats, honey and molasses and called Phoenix D, that’s proved most popular.

“The story behind that one is the extinct Judean date palm. All those trees were destroyed in present day Israel by the Romans around 2,000 years ago,” says Jacob.

“Fast forward to 2005 and they found a jar of these dates in the tomb of Herod the Great. The archaeologists decided to try and plant it and it actually sprouted, meaning it was the longest recorded germination for a seed. The beer and the tree share a similar story – lost to time and then resurrected.”

As for future plans, Jacob and Deb are keen to crack the local market before expanding in major cities such as Wollongong and Sydney.

“Our plan is to fill the local shops first,” says Deb. “We’ve been approached by a lot of people to sell in cans because we don’t have taps. So we’re looking at hiring a mobile canning line. We also want to do a few seasonal beers – to keep changing our range.”

The latest of these, an ANZAC Day release named Lone Pine, contained more than 200 ANZAC biscuits, with all proceeds donated to charity – in this case Legacy.

“That’s why our motto is ‘cheers to change’,” says Deb. “We’re hoping that, through the sales of our beer, we can bring change to a world that desperately needs it.”

You can find out more about Eden via their website. 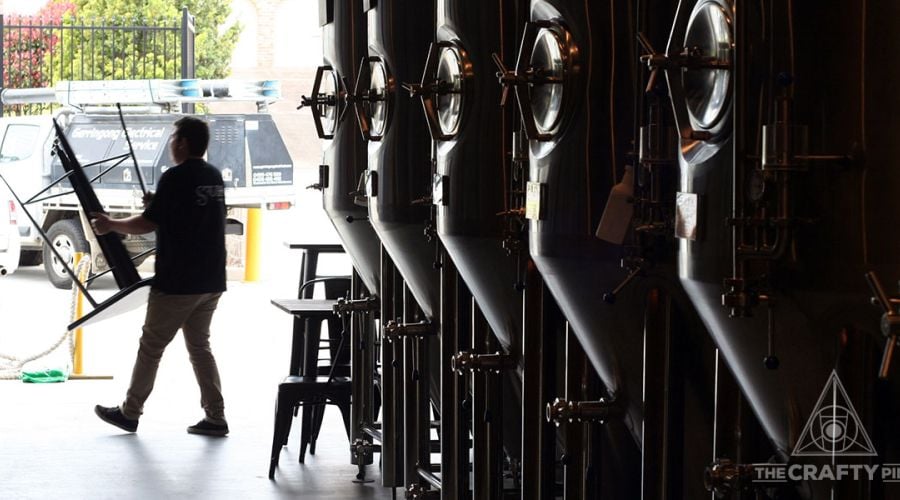