The biggest day of your life. It may be getting married, buying your first home or being hired for your dream job. For Matt Warner, one of the three Matts who founded ParrotDog, he can't pick between two: the day the Wellington company put down its first contract brew or the day they moved into their new brewery on the city’s south coast.

Now they're settling into that new brewery, Our Man in NZ, Jono Galuszka, looks at the Matts' rise from brewing in a toilet, through brewery purgatory, to becoming one of New Zealand brewing’s rising stars with champion trophies and a phenomenal crowdfunding effort to their collective name.

Hearing Matt Warner talk about ParrotDog’s first brewery is akin to hearing a horror story about the grungiest of student flats. The Vivian St site was afflicted with rubbish appliances, cramped conditions and incessant noise flowing through the front windows thanks to the driveway spewing out onto State Highway 1. Surrounded on all sides by towers of concrete, steel and glass, it was hardly an environment conducive to creativity.

ParrotDog’s new home, 100 metres off the North Island’s south coast in Lyall Bay, is the polar opposite. A modern office space flows out onto a deck just big enough to provide a view of Wellington’s best surf break. Downstairs, customers grab coffee and take in the 70s vibe of the Nice. Takeaway while waiting for their riggers to be filled. A cavernous space is going to be turned into a bar, which will likely have a shower and surfboard rack outside for those wanting to enjoy a pint after catching a few waves.

A boardroom, staff room and smaller meeting room all have views out into the brewery. The four-vessel, 5,000 litre automated brewhouse and 600 litre pilot brewery make for an impressive sight, while a new centrifuge, bottling line and kegging machine should keep their hop forward bottled range in better condition for longer. The first beer brewed on the new system, a batch of Pandemonium pilsner, was tasting infinitely sharper than it ever had. No doubt it would get cleaner after filtering.

Matt Warner’s tired appearance cannot hide the obvious happiness he has at being in his new brewery, largely paid for with the NZD$2 million ParrotDog raised in 2016 through a crowdfunding campaign. It is a far cry from his brewing origins, making homebrew in the toilet of the flat he lived in while studying law and figuring out what to do with his life.

The homebrew ended up being rather good and feedback he was getting from professional brewers, attained by smuggling flagons into local beer events, was good enough for him, Matt Kristofski and Matt Stevens to go into business together in 2011 and contract brew their first beer, an IPA, at mike’s in Taranaki.

The move up to a bigger system resulted in the IPA being intensely bitter, to the point where they were told to dump it. Instead, they named it BitterBitch, released it, and hit the promotional jackpot by winning the People’s Choice award at Beervana that year.

They opened their first brewery on Wellington’s Vivian St in 2012, before moving to Lyall Bay this year. They’ve won many fans and awards along the way, most famously taking out the trophy for Champion International Small Brewery at the Australian International Beer Awards in 2015.

Reading between the lines, however, Matt Warner seems keen to forget one part of the story as soon as possible: Vivian St. He says the biggest decisions in ParrotDog’s history were getting Matt Stevens involved, contract brewing, a rebrand, then moving to Lyall Bay. While the more he talks about Vivian St, the more one gets the impression it was his own personal purgatory.

“I was the one who was wanting to get out of Vivian St the most,” he says.

ParrotDog was using various storage sites to hold stock and equipment and the brewery had no room to swing a mouse, let alone a cat. Matt Warner was pushing at one point to move into a warehouse off the beaten track near the airport. But his business partners found the Lyall Bay site while he was out of the city.

“We had nearly signed the spot out by the airport, but the boys said, ‘We have to get this’,” he explains.

The building used to be a hodge-podge of office and storage space. Proffer, the company that helped design ParrotDog’s office, was based where the bottling line now is. An art collector used part of it to store paintings. Bicycle Junction, a bike hire company which is going through its own crowdfunding campaign, used it for storage. Now, it’s a shrine to stainless.

Having swanky office spaces, enough room in the brewery to play a game of indoor cricket while mashing in, and a chiller big enough to swing a forklift around is all good and well. But the thing Matt Warner appreciates the most is the vibe.

“When we still had both sites, I was brewing at Vivian St then coming here [to Lyall Bay] afterwards to build. Every time I would drive from there to here I would go through the Mt Victoria tunnel and a weight would come off my shoulders. It was so calming out here.”

Lyall Bay is best known for its surf break, the sound of airplanes and the residents’ never-ending battle against salt. But it is quickly becoming a retail hub, with plenty of cafes and restaurants setting up shop to take advantage of the increasing foot traffic. Matt Warner says ParrotDog plans to be part of the community, and has already been sponsoring events in the area to show its new neighbours the brewery is in for the long haul.

“We love Wellington," he says. "We had to take a significant rent hit just to do something of this scale and be close to the heart of Wellington. We want to have a good time, and hope our staff are having a good time too.”

Something they possibly love more is the 812 people who who backed them via the crowdfunding campaign. They made it possible for ParrotDog to take their time on the new build, get gear built to their specifications and, basically, stress a lot less. But the prospect of failure did cross Matt Warner’s mind.

“I do remember the night beforehand. We knew it didn’t matter, because we were going to move either way. Plan B was to sign the lease for Lyall Bay, bring the shitty old equipment over here and do another shitty brewery. We just needed a bigger production space.

“The fear of failing in the public eye was bigger than not being able to move.”

The risk, however, has come with a big reward. Vivian St hampered expansion efforts, especially after they landed distribution deals with Coles in Australia and Moa in New Zealand. The focus had solely been on pumping out the core range, with seasonals and one-off releases becoming increasingly rare as the years went on.

But Matt Warner has been busy since brewing started at Lyall Bay in May. Some of the first batches brewed included a mixed berry sour ale for GABS and a New Zealand-hopped cloudy IPA for the New Zealand IPA Challenge in Queenstown. But selling the core range remains the bread and butter and a big push is on the cards.

“Now we’ve got Lyall Bay turned on, it’ll be interesting to see what we can do,” Matt Warner says. “It is quite exciting to talk amongst ourselves and ask, ‘Where do we want to sell beer?’. Now that we’re going to have beer to do it with, we can start thinking about it.”

Australia is a key market, with ParrotDog keen to leverage off of its Coles deal. Asia could be another export destination, although Matt Warner is keen to preface it with some advice he has been given – have someone on the ground.

“We have to be wherever ‘there’ is, getting amongst it and making connections. You can’t just ship a container of beer and forget about it.”

It's fair to say having staff, a bar, a takeaway shop and export markets to worry about were the last things Matt Warner thought about when he was making homebrew in his student flat. He acknowledges it all adds to his workload and made things especially tough when ParrotDog was figuring out how to move ahead while stuck in Vivian St.

But, he says: “Whenever I had feelings like that I had to remind myself about what else I could be doing. It’s still us having a good time and making some beer.” 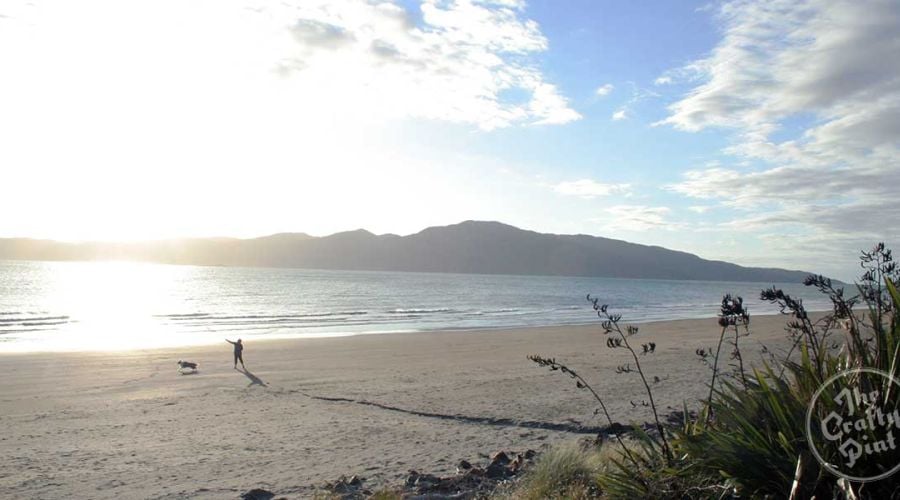