That sad state of affairs was the spark that led to Michael Burton wanting to create an easy way to dodge the drama of an empty keg.

“I was heavily into homebrewing and found that my kegs always ran out of beer at the most inopportune of times – when you’ve got mates over,” he says.

“That meant I let down my visitors – who had neglected to bring their own beers because I told them I had brews on tap.”

So he used his background in computer science and engineering to look at ways to solve this dilemma – and so was born the startup called Binary Beer.

Working out of the University of Wollongong’s iAccelerate incubator program, with the help of five uni students, Burton is developing sensors that are attached to beer kegs and send real-time information back about their condition.

Wollongong’s Five Barrel Brewing and the Headlands Hotel in the northern end of the coastal NSW city have joined Burton in a trial of his technology, with the first batch of kegs recently sent out into the wild.

The sensors, which are roughly the size of an iPhone, are attached to the top of the keg. While Burton is still working on a way to measure how much beer is left, the sensors are now able to provide information such as the location of the keg and its temperature – important information given no brewer wants their beer sitting out in the sun for days on end.

As for how his devices work, Michael says: “Our sensors are using a new wireless technology called LoRaWAN which allows battery operated devices to transmit small amounts of data for very long distances (over 10km) using so little power that a set of batteries can last for many years.

“This is a game changer for connected devices.”

He quickly realised the market for a device like his was broader than just homebrewers. Pretty much any brewery around the world would like to be able to keep tabs on their kegs.

He’s already in talks with Heineken and Anheuser-Busch about the technology – so clearly the big guys see some real value in the beer tracker.

Phil O’Shea from Five Barrel Brewing saw the appeal too – and not just because of his own background in IT.

“Knowing the condition of the keg, the temperature, the volume – that information gives us a lot of power,” says Phil.

“If a keg’s running low on a Friday afternoon, then we can make sure that we get them a fresh keg so they don’t run out of beer, instead of getting a panicked call on a Saturday evening.

“That does happen – on occasion I have ended up delivering beer late at night, so this would help steer people away from that.”

Down the line, there is also the possibility that the trackers could send the brewer an SMS when the keg is running low, so they can call the bar and say: “Hey, you want to buy another keg?”.

One of the frustrations of brewers is that they have little control over how their kegs are handled and stored, but if poor handling affects the beer then the blame is usually sheeted home to them.

But the keg tracker, according to Phil, would provide information as to what went wrong – and whose fault it was.

“If there was a reported problem, then we’d have the data that would show how the keg had been treated up til that point,” he says.

“If, for example, we sent a keg of IPA off to a bar and it sat warm for two months before they decided to tap it, that would be indicative of poorly handled product and not with the way that we’ve made that beer.”

Kegs aren’t cheap things – Phil estimates they cost around $160 a pop once they’re bought and branded. So to have some of them lost – or maybe stolen by homebrewers – is a real hit to small brewers. Just last week Mash Brewing in WA announced a keg amnesty, claiming its staff only know the whereabout of a third of their 400 kegs.

However, Michael warns the technology probably won’t help track down a stolen keg – the thief could simply remove the tracker with a hammer. But he reckoned they could limit a thief’s chances of stealing one in the first place.

“If we can tell when a keg is empty, when it’s sitting out in a car park waiting for pickup, we can reduce that time significantly, which is reducing the possibility for that keg to be stolen,” he says.

“That way we can attack the problem in a much better way than trying to recover the kegs after it’s been stolen.”

You can find out more via Binary Beer's website.

You can read other articles in our Collaborators series here. 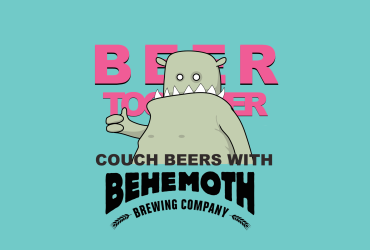 Beer Together: Couch Beers With Behemoth