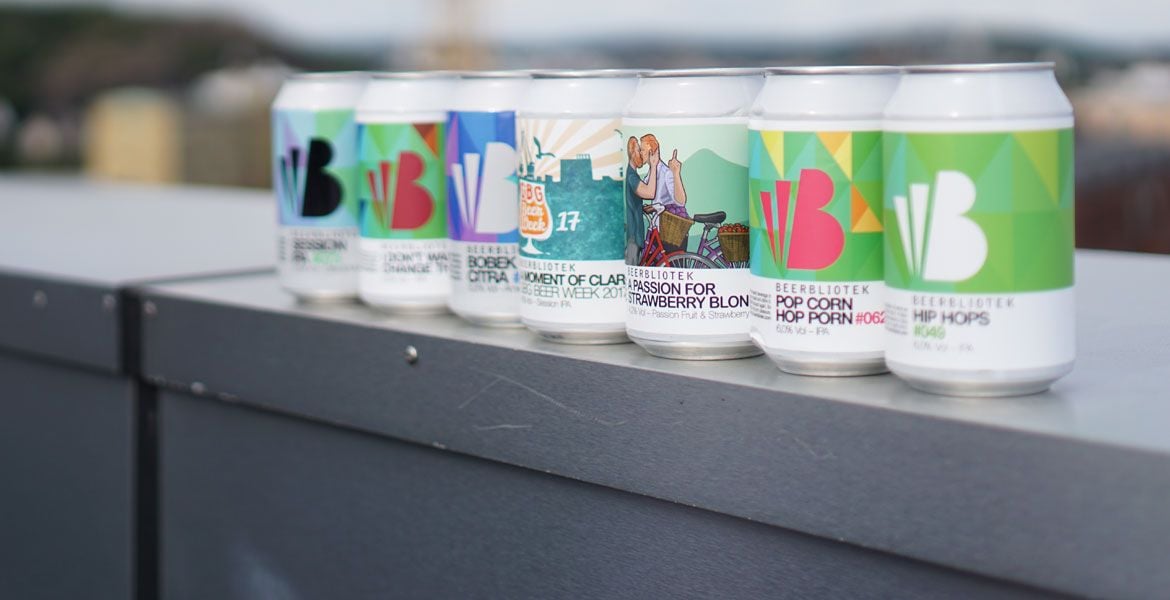 Just before Christmas last year, a barman at Mother Kelly's in Bethnal Green was eager to point us in the direction of beers from Swedish outfit Beerbliotek, explaining they were producing some of the most interesting and high quality beers passing through his taps and fridges. Months later, while putting together an Aussie Exports feature on The Beer Podcast, we were told there was an Aussie at the heart of the operation too*.

A little over four years ago, Beerbliotek was started by a Swede, a South African, a Kiwi and an Australian in Sweden’s second largest city. The Australian in question is Adam Norman, and here we find out how he made his way from Melbourne to owning a brewery in Gothenburg, one with striking cans and bottles that are shipped across continents as well as a secondary site dedicated to all things sour and wild.

Beerbliotek is based in Gothenburg, Sweden, an old working harbour town that is leading the way in food culture here in Sweden.

HOW DID YOU END UP RUNNING A BREWERY IN SWEDEN?

I am originally from Melbourne so, when I moved here in 2006, I did what all expats do and started an espresso bar.

As time went on, and as fun as it was, I kind of had a realisation that I couldn’t be standing there as a 50-year-old serving the cool kids coffee.

A group of us had been travelling to different beer events around Europe and had started homebrewing. I guess we took it a little more seriously than most people; trying to pump out two batches a week and then giving away the test batches in return for empty bottles. Repeat.

In the end, it became time to make a call and we decided to buy a 1000L brew kit and brew full-time. That was alongside our other work, of course.

WHO ARE THE PEOPLE YOU'RE RUNNING YOUR BREWERY WITH AND HOW DID YOU GET TO KNOW THEM?

My business partner from the café, Richard (from New Zealand), is one of the owners and brewers. Than we have Darryl, a South African, who takes care of branding etc, and Anders, our only Swede in the beginning. He takes care of the warehouse and logistics.

We expanded about two years ago into a new facility. At the same time, we took in two new owners, Niklas and Gary, and they are starting to work more and more with the company too.

WHAT STYLE OF BEERS DO YOU LIKE TO BREW?

We have brewed 204 different beers in our four-and-a-half years, so I guess the short answer is a bit of everything.

Our original home now only produces wild and mixed fermentation sours, whilst our main production facility takes care of the rest, as well as making the wort for sour brewery.

Of course, the market dictates to an extent what we brew, so there tends to be a fair few IPAs on their way out the door. But we fit in plenty of stouts, double IPAs and Berliner Weisses from up here too.

WHERE YOU INVOLVED IN BEER IN AUSTRALIA IN ANY WAY BEFORE YOU LEFT?

Not in any other way than drinking it and being interested in it.

Ever-evolving, supportive and some fantastic beers are being made. It’s definitely one of Europe’s best beer scenes at the moment, and getting better and better every day.

For a long time, Gothenburg was really a big focus for that but, nowadays, the momentum is spreading and there are real quality breweries popping up all over the land.

Of course, there are some pretty average ones in there too – but that’s the way the industry works.

HOW DOES IT COMPARE WITH AUSTRALIA?

It’s pretty hard to say, to be honest. The markets are different. I guess the big influences over both tend to be American, and the way that craft has developed there.

But in Europe, in general, the market for different styles, and more extreme beers, is more accessible.

On my last trip to Australia, I had some great beers, Modus Operandi’s Sonic Prayer and Lost Key were both great. Two Metre Tall had some really nice stuff, as did Moon Dog of course.

Having said that, it feels a little like the market demands lower ABV stuff. I found a lot of the IPAs that were readily available in Australia tended to be 5 to 5.5 percent ABV and pretty heavy on the crystal malts. You very rarely find an IPA in like that Sweden.

DO YOU THINK THE BEER INDUSTRY WHERE YOU ARE HAS ANY LESSONS FOR THE ONE HERE IN AUSTRALIA?

I’m not going to stand here and preach beer. There are some terrific breweries in both countries that could teach each other many things. That’s why we did a collab with Moon Dog when I was down. Everyone always has place to learn.

If you already know it all, then it’s time to stop. The beer scene is constantly evolving.

IS THERE ANY INTEREST OR KNOWLEDGE OF AUSTRALIAN BEER IN SWEDEN?

Not really. Coopers. I guess Bridge Road and Mountain Goat have had a bit of exposure through their work with Mikkeller, but otherwise I’d say it's limited.

Great beer doesn’t always travel well, so it’s tough. Why send beer to the other side of the world, just for it to be of a lesser quality than if it were served at home?

We send quite a bit of beer to New Zealand, but our importer there is great. They make sure it’s pretty quick transport (one month); it’s refrigerated the whole way, which is obviously important. And they’re happy to take whatever beers we think will travel.

WHEN AUSTRALIAN BEER LOVERS VISIT SWEDEN, WHAT DO YOU THINK ARE THE UNMISSABLE PLACES THEY SHOULD VISIT?

Well. If they’re coming to Gothenburg, they should obviously drop past our taproom. Then there are many cool places to visit:

AND WHAT ABOUT SOME LOCAL BEERS THEY ABSOLUTELY MUST TRY?

Dugges – in my opinion one of the best, most consistent breweries in Europe.

O/O Brewing are making some of the best hoppy stuff out there.

* In all honesty, we should have picked up on this sooner as Adam brewed the Modersmjölk NEIPA with Moon Dog while on holiday in Australia back in April. So many breweries, so many beers, so little time... Many bowling clubs have embraced easy-going evenings of Barefoot Bowling to help them survive. Others are turning to craft beer. Kerry McBride joined brewers, beer lovers and bowlers at Melbourne's Flem-Ken Bowlo to find out why. read on