Dark Side Of The Duck

A braggot that combines mead and barrel-aged strong ale in a 14.3% concoction dating from Medieval times. An Egyptian bread beer. And a witbier / Berliner weisse hybrid made with rhubarb and raspberries. While there are a number of Australian brewers out there pushing the boundaries of what beer can be, Red Duck has a pretty strong claim to be brewing the weirdest of the lot. With a keen eye for recreating old – even ancient – beer styles Scott Wilson-Browne has something of the mad professor about his approach and is preparing to unleash three new dark beers, including one that even he admits is “an experience” as much as a pleasure, plus two rarely seen favourites.

“We brewed a lot over summer and autumn and managed to get on top of demand for the regular ales so had the time to do what I like, which is making different beers,” says Scott. “I like exploring the history of beer and there are more outlets popping up, especially in Melbourne, that are looking for something different.”

Few could be more different than his forthcoming Gruit Stout, a highly smoky beer that uses no hops but pretty much everything else you can think of – and then a little bit more. Based on a style from more than half a millennium ago, it started with an oat and spelt porridge, had a range of different malts added – including 50kg that were “scorched” in the kettle – and also incorporates homemade hawthorn berry juice and stinging nettles.

“I have a mate who’s made hawthorn berry juice before,” he says. “It’s very bitter – clean, earthy and bitter – so I used that to replace the hops. I collected the stinging nettles from the farm on the day and made them into a juice that was like a green goo that was added at the end of the boil. I’ve discovered as it’s conditioning that it’s picked up a smoky, scorched flavour and is pretty dry. It’s an ‘experience’ beer and really is extreme, but I never set out just to make the most delicious beer, just something that’s authentic to hundreds of years ago.”

It’s certainly the most unusual of the five dark beers coming your way soon. Among the others are the return of The Ox, an Imperial Stout that Crafty and a few other beery folks reckon could be the best of its kind in Australia, and the Queen Bee. The latter is a honey porter that Scott will only make when he can get hold of an exact type of dark wild bush honey, which has meant it’s been well over two years since the last batch.

Completing the lineup is a Belgian Vanilla Porter that combines the Red Duck Porter’s normal malt bill with a Belgian yeast (although cool fermentation keeps its spicy tendencies in check), additional sugar and some vanilla extract in a beer he says is smooth, silky and a little funky, plus the Loch Ness Monster [Edit 29/05/2011 – the Monster is now pencilled in for a 2012 release]. This is a bigger version of the whisky-barrel aged Scotch Ale that was among Crafty’s favourite beers of 2010. It has spent twice as long as the original Loch Ness did in the barrels, picking up more oaky and whisky characters, and is a full 50% stronger in terms of alcohol content. All five will be coming out in 330ml bottles and a very limited number of 750mls. 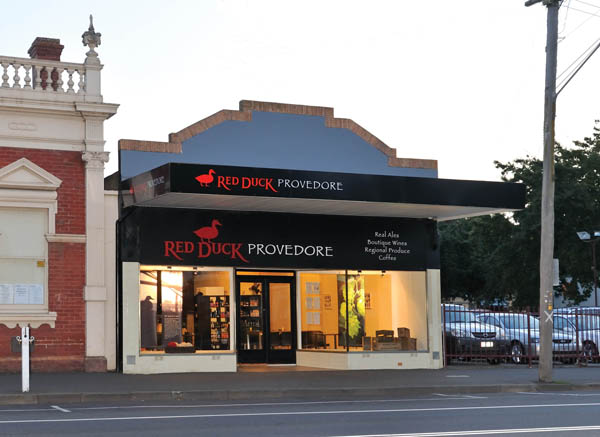 Red Duck is also about to up roots too. Having been based in a converted dairy on the grounds of the Purrumbete Homestead for the past few years, they’ve decided for a number of reasons – both family and business – to move to Ballarat. Approval should be signed off any time now, with the intention of having the brewhouse moved and ready to roll in its new home sometime around the end of June. Scott hopes it will help him take his beers on the road more readily and is looking into the feasibility of opening the brewery to the public on occasion at some point in the future.

“There’s a big area here where people are asking where they can get our beer,” he says. “Being out on the farm made it hard to distribute. This also means we’re closer to Melbourne.”

The Provedore, Red Duck’s cafe and cellar door in Camperdown that stocks the brewery’s beers alongside local and gourmet produce, will remain open.

“It’s growing and getting a good reputation and we’re looking at opening something similar in Ballarat. The longer it’s there, the more and more stuff we’re getting into the shop.”

As for the availability of the new beers, they’re still awaiting labeling and Scott is wavering over whether he’s ready to set them free yet. If you’re desperate to get your hands on one in the near future, however, The Ox will be on tap at the Royston and Terminus hotels for Good Beer Week. Crafty secured the only two 30l kegs in the world for part of its curated tap lineup at both venues. It’s the beast at the end of a run through of beer styles from breweries across Australia and is a rich, dense, oral orgasm of a beer that’s not to be missed. We’ll keep you posted on the release of the others as soon as we know more.

Update 11/05 – Most of these new beers are likely to be released end of June / early July to allow for more conditioning time. Plenty of time to build the anticipation!