You've both enjoyed successful careers in the corporate world spanning more than two decades in the Northern and Southern Hemispheres. You've decided to move away from the high pace and intensity of Sydney for a quieter life in the picturesque coastal town of Forster. Now, how to spend the rest of your days?

Perhaps a hobby, something both of you enjoy and which brings you satisfaction and pleasure. Something like homebrewing. Maybe brew two or three times a month, sharing your wares with your new neighbours as you enjoy the downtime afforded by your previous careers' endeavours.

Sounds like a pretty sweet plan, don't you think? Yet it wasn't good enough for Helen and David Black.

Nope. They'd already been enjoying their homebrewed beers for more than 20 years and clearly weren't ready to put their feet up just yet. So, having made the move to Forster – where they used to holiday regularly – a permanent one, they launched The Coastal Brewing Company.

Of course, at a time when the beer industry is becoming more competitive than ever, and knowing they were moving to a town without a local brewpub, they decided to open one of their own where they could just be responsible for what went on within its four walls. Except they didn't do that either. Nope, they decided to make Coastal Brewing predominantly a production facility with its sights set initially on their local region, then Newcastle then Sydney then, well, they're only turning one next week so let's not get too far ahead of ourselves...

"We moved up here and wanted a new challenge," says Helen. "And David just loved brewing..."

"We looked at other models and felt this was the one that would best suit us," adds Helen, with Forster's seasonality – a big influx of tourists during the summer and easter holidays, but pretty quiet the rest of the time – central to their planning.

So, once their new house was built, up went a brewery complete with 12 hectolitre brewhouse, tasting room and canning and out, a little while later, came The Coastal Brewing Company's blue cans, complete with Pelican logo and motto "Beer that fits the bill". Since the initial pale and golden ale, they've been filled with everything from bitters inspired by the Blacks' English roots to IPA, lager and American wheat beer.

Today, they're sending a steady stream of beer to Newcastle and Sydney plus many parts of regional NSW – and have a double IPA pouring as a GABS Festival Beer if anyone's reading this in time for the Sydney leg on June 2. Whether you are or not, here's a little more about the Blacks as part of our Who Brews...? series.

The Coastal Brewing Company is a husband and wife, family-owned microbrewery based in the coastal town of Forster, NSW. Following incorporation in 2016, premises fit-out and equipment installation in early 2017, production commenced in May 2017 and we opened the tasting room in June 2017.

Co-owner and head brewer David Black has a Graduate Certificate in Brewing from Federation University (and is currently studying for Graduate Diploma in Brewing). Prior to establishing the brewery, he spent 25 years as a Chartered Accountant, including 11 years as a Partner, with Deloitte Touche Tohmatsu, a large accounting firm, working in the UK, Sydney and Canberra.

Co-owner Helen Black has 20 years’ experience in marketing and communications, most recently prior to starting the brewery as Head of Marketing, Communications & Customer, Australia & New Zealand for Zurich (General Insurance). Helen looks after sales, customer care, communications, freight and distribution at the brewery.

We have one employee – Ross – who helps us with sales and distribution.

We have a 10 BBL (1,200 litre) Premier Stainless Systems brewery installed in Forster, a coastal town about 90 minutes north of Newcastle and three-and-a-half hours north of Sydney – pretty much half way between Newcastle and Port Macquarie.

The brewery has a tasting room, which we open on Friday and Saturday afternoons year round, and every day during holiday periods.

Effectively, we commercialised a hobby of 20-plus years – brewing and drinking beer! We had been coming up to Forster regularly and decided we wanted to move up here full-time and do something different before we got too old to give it a good shot! Forster didn’t have a brewery, we loved the area, we love beer…

Not really one that set us on the path – but the thing that finally made us give up the good jobs and regular income we had grown used to was a trip around California breweries in 2016. Russian River, Stone, Sierra Nevada and the likes are an inspiration to anyone interested in brewing!

We opened in June 2017 with two beers: our Boomerang Beach Pale Ale and our Number 1 Golden Ale. Since then, we have brewed 11 more – our 13th (hopefully it isn’t unlucky!) is our GABS beer, Double Treachery, a 9.1 percent ABV double IPA.

The beers we have brewed range from a traditional Aussie lager through to a kolsch, an American wheat beer, an XPA, an Irish red and two IPAs, the double IPA and a milk stout.

We have a number of permanent taps around the Forster area and we are on regular rotation in venues in Sydney and Newcastle as well as regional centres including Gloucester, Armidale and Tamworth.

Double Treachery will be on Container Bar A at GABS 2018 and in Sydney we will have a stall at GABS serving Boomerang Beach Pale Ale, Elizabeth English Bitter, Double Treachery and Black Head Milk Stout.

We can most of our beers on our own canning line at the brewery in Forster. Our cans are in bottleshops from Port Macquaire down to Southern Sydney and also in regional NSW and we recently went live on Dan Murphy’s online with a select range of beers.

We have had people send us photographs of our beer having made it to Sweden and the USA though!

The name of the brewery, and the names of our beers, are inspired by the area in which we live and work.

All of our beer names relate to the local beaches/waterways; for example, our milk stout is called Black Head Milk Stout, our Irish red ale is Red Head Red and our English bitter is Elizabeth English Bitter (after both the beach and the Queen).

Not a lot – we are about to go on holiday so we have been running down supplies at home. We do have cans of our Red Head Red and Elizabeth English bitter in the fridge, however, and we're looking forward to getting to visit some of the great UK breweries over the next couple of weeks.

Whatever we have packaged most recently!

You can find Helen and David at The Coastal Brewing Company, 3 Dalman Street, Forster. If you're in their neck of the woods on June 9, 2018, you can join them for their first birthday bash: from noon to 4pm, they'll be pouring two new beers, the GABS DIPA and an Aussie pale ale called One Mile, with the Kingfisher Café on site serviing sliders. It started out as a money-saving hobby, became a rather more expensive one, and ultimately turned into part of the craft beer culture on the NSW coast between Sydney and Newcastle. We got in touch to find out who brews Lake Mac beers. read on 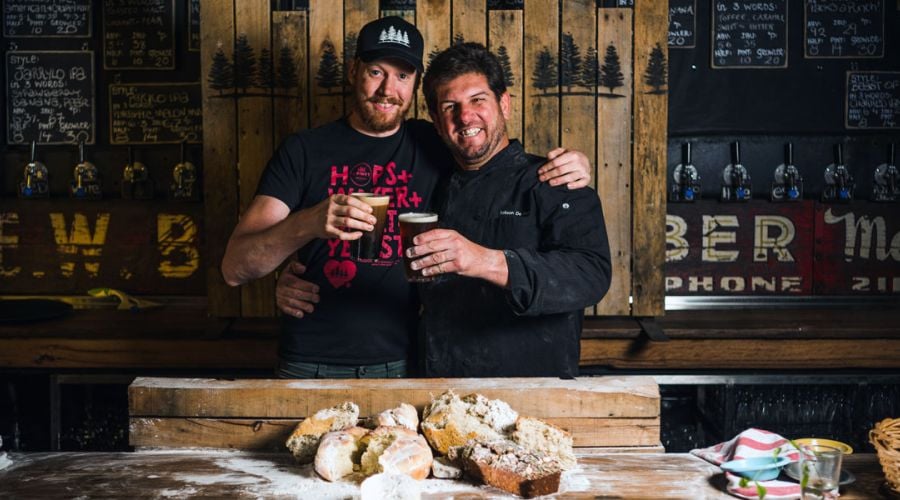