New Zealand’s large foreign-owned breweries flexed their muscle at the Brewers Guild of New Zealand Awards in Nelson on Saturday night, together taking home five of the 11 beer style trophies on offer – although the Guild appears to have breached its own award rules with the selection of one trophy winner.*

Heineken-owned DB Breweries won the New Zealand Lager trophy for Monteith’s Original Ale. The beer is a New Zealand draught – sweet, brown, highly-carbonated lager. Beer writer Phil Cook noted on Twitter that the Guild’s 2018 entry and style guide says a trophy cannot be awarded to a beer if it is labelled differently on the bottle to the style category in which it is entered; for example “Bob’s Ale” cannot win a pilsner trophy.

The rule was brought in after Tui – a New Zealand draught branded as an ‘East India Pale Ale’ – won the New Zealand Lager trophy. The Crafty Pint has asked the Guild to clarify the situation and will update this article accordingly once we get a response.

UPDATE: We’ve received clarification - see the foot of the article.

A shake-up to the awards criteria since 2017 created multiple new overall awards, including champion small, medium and large New Zealand breweries. Lion’s trophy haul saw it claim the Large Brewery crown, while Wellington based ParrotDog (pictured at top) followed up their win at the Malthouse West Coast IPA Challenge with the Medium Brewery award.

Co-founder Matt Warner gave special thanks to the company’s shareholders, who came on board through two different crowdfunding campaigns, for enabling ParrotDog to build their new brewery.

“It is such a great place to make beer," he said, while their celebrations on stage were confined to hugs – much less debaucherous than their gumboot-enhanced triumph following the West Coast IPA Challenge win.

Read about ParrotDog’s rise from brewing in a toilet to its crowdfunding success here as their beers make a return to Australia via Coles, and learn about the importance of the West Coast IPA Challenge on the New Zealand brewing industry here.

Champion Small Brewery went to another Wellington company, Fork Brewing – the brand for the Fork and Brewer brewpub. Brewer Kelly Ryan (pictured above) was not at the awards night, instead learning the news via Twitter while watching the All Blacks get beaten by the Springboks in Wellington. Brewery co-owner Colin Mallon gave Kelly all the credit for the win.

“He can make beer, talk to people and draw great pictures [Kelly draws some of Fork’s tap badges]," he said. "Fuckin’ hate that guy."

Another new award was the Champion Exhibitor, given to the brewery which recorded the best results over the range of beers it enters. If, for example, two breweries have the same amount of golds, the brewery which entered less beers is deemed the better. Auckland based contract brewer Bach Brewing won the award, having already won the Best Pale Ale trophy for Billfish APA.

Founder Craig Cooper, in a pre-recorded speech, described the results as “unbelievable”. He thanked Steam Brewing Company, who brew all Bach beers: “There would be no Bach Brewing without Steam.”

That result helped Steam, which rarely releases its own beers, win the Champion Manufacturer trophy for the fourth year in a row. Operations manager Shane Morley deflected much of the praise to the likes of Epic Brewing, Bach Brewing, Birkenhead Brewing Co and Croucher Brewing, who all use Steam to make beer.

“All we do is work really really hard – we work our guts out – to produce the best beers we can,” he said.

The final new award was Champion New Zealand Beer, decided by pitting the trophy-winning beers against each other to find a result. Moa Brewing’s Southern Alps White IPA – an IPA brewed with a Belgian yeast, Citra and Nelson Sauvin hops, wheat malt and coriander, was deemed the winner, having also taken out the US Ale Styles trophy.

Head brewer David Nicholls was visibly shocked when he collected the style trophy early in the evening – “a Belgian crossover beer winning the US style - it’s a bit different.” – and on the verge of tears when he went back on stage for the Champion award.

“I’ve been doing this for a few years now," he said, "and this is totally unexpected.”

Upper Hutt’s most famous brewery may be Panhead Custom Ales, but it was a neighbour, Kereru Brewing (pictured above), which won the European Ale Styles trophy for its Feijoa Weisse. The beer also took out a gold at the Australian International Brewing Awards, where Kereru were crowned Best Small International Brewery this year. Brewer Alex Bartley Nees was on the verge of hyperventilation on stage as fellow brewer Emma Bell deliver a sharp acceptance speech: “This is fuckin’ rad. We will take it!”

While there were 903 entries into the awards, 143 of those were in the Strong Pale Ale category, easily making it the most competitive trophy. Taupo-based Lakeman Brewing came out on top with the Hairy Hop IPA. Owner James Cooper, who had obviously enjoyed a few beers prior to the win, made a rambling acceptance speech, in which he credited “great water quality” for the result.

8 Wired, which has one of the biggest barrel collections in the Southern Hemisphere, won the Specialty, Aged, Barrel and Wood Aged Styles trophy for its Locomotiv Merlot – a Russian imperial stout aged in Hawke’s Bay merlot barrels for a year – while Aotearoa Brewing, which releases beers under the Mata brand, won the Flavoured trophy for Cola Cuz.

The awards evening was largely celebratory, with a video of brewers reading mean reviews of their beers providing comic relief, but there were sombre moments too. Guild chairman Jonathan Alve took time to deliver memoriams for Terry McCashin and Geoff Logan, the respective founders of Mac’s and Sunshine Brewing, who died in the past year.

Michael Donaldson, who won the Beer Writer of the Year award for an unprecedented third time, spoke of the mental health struggles people in the industry face.

“I know there are a lot of people who suffer from anxiety and concern about if they are doing the right thing, if they’ll make money, and what the future holds," he said. "I urge anyone, if you are struggling at all, to be aware of it and talk to people.”

The brightest moment of the awards was reserved for Sprig and Fern owner Tracy Banner, who was given the Morton Coutts Trophy, and a subsequent standing ovation, for service to the industry. Tracy brings up 35 years in brewing this week.

“A lot of people in this room probably aren’t even 35,” she exclaimed.

She said she nearly decided to study languages, but instead took up science, which got her a job doing lab work in a UK brewery. Tracy, originally from Liverpool, had spent the past week musing about what life may have been like if she did not get into brewing.

* The rationale for the trophy awarded to Montieths is: 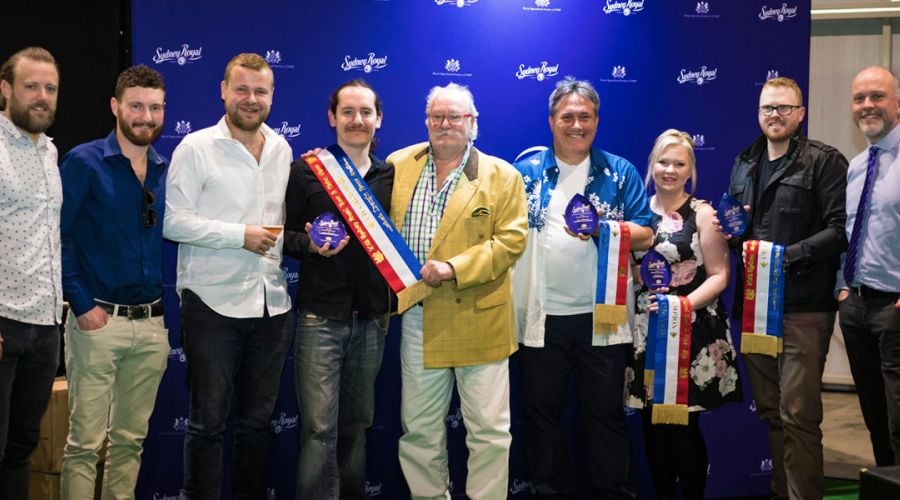