Liberty Brewing Company is one of the brightest stars in the New Zealand beer scene, earning a cult following thanks to beers like Prohibition Porter and C!tra. Demand is high on both sides of the Tasman Sea, with the decision to start brewing some Liberty beers at Hawkers in Melbourne for the Australian market only likely to increase the brewery's Aussie fanbase.

Our Man in NZ, Jono Galuszka, used a free morning in Auckland to visit Liberty and find out what makes its founder Joe Wood tick.

Liberty’s address is listed online as being in Helensville, Auckland. For most, Auckland brings to mind the Sky Tower, K Road and inner-city dwelling. But Helensville is not Auckland as most know it. It is out west, a 40-odd minute drive from the city centre, past paddocks, vineyards, signs advertising homekill services and fruit stands with an honesty box masquerading as a till.

The road to Helensville takes you through a few of Auckland’s satellite suburbs, which are more akin to rural service towns than outlying suburbs. You may see Heineken advertised outside bars in the middle of the city, but it’s Lion Red – the equivalent of VB for Kiwi tradies – being touted. There are still shades of the city, though, with the odd designer dog and utes that look like they have never touched mud.

You can catch the bus all the way to Helensville from the city centre. If you get off at the first stop in Helensville and look directly ahead, you are greeted by the words “Liberty Brewing Tap Room”. The industrial complex on the opposite side of the road to the taproom has been Liberty’s home for the past three years, after starting production in New Plymouth (with a brief spell sharing facilities with Hallertau in between).

For the brewery’s founders, Joe and Christina Wood, the move to Helensville was a move home.

"That’s the way we have developed the business, and is why you don’t see me around at events as much as you used to. It’s just so comfortable here.”

Joe’s definition of comfortable may differ from others’, however. After high school, he got an education degree and taught English in central Auckland. He would then head to the port after work to do a night shift loading and unloading large tankers.

“If the boats ran until I had to go to work in the morning, I would have a shower and go straight to teaching English,” he says.

He didn't even have weekends free; a part-time position at the Helensville hot pools kept him busy on Saturdays and Sundays.

Somehow in the middle of all that he started homebrewing. The motivation, he says, was wanting to drink a beer which blew his mind but he couldn't find in Auckland: Schneider Weisse Aventinus.

“I tasted that for the first time on the Gold Coast at Bavarian House, and remember thinking, ‘Fuck, this is something else, like a Perky Nana in a glass’.”

His reaction to his first hoppy beer, a Croucher Pale Ale, was similar: “I thought, ‘Fuck, that’s yum, that fruity flavour’.”

His homebrewing hobby saw him create the Western Brewers Conference homebrew club and take over Liberty Brewing from Yeastie Boys co-founder Stu McKinlay. Before becoming a brewing company, Liberty was a homebrew supplies business, founded in 2006 by Stu and Brendon MacKenzie.

The offer to take over Liberty was made via RealBeer, a New Zealand online brewing forum. Going through the posts is like taking a trip back in time. There are posts about the birth of Yakima Monster – the beer with which Liberty won a trophy for best IPA at the Brewers Guild of New Zealand Awards in 2012 – and a few stories which will give you a laugh at Joe’s expense.

The jump to commercial brewing was a promotional service for the homebrew supplies business. Joe thought people who tried Liberty beers would buy brewing ingredients through Liberty. Early brews included a rotating series of XPAs called called West Coast Blonde, which formed the basis for Elixir Bright Ale. He also produced High Carb Ale, a protest against the low carb beer trend, and the manically named MMMMoMMftCHv3 (learn more about that beer here).

All up, Liberty produced 60 different beers in two years on a 300L brewery with three fermenters. But it was C!tra, a 9 per cent IIPA, that really changed the game.

“We pretty much just brewed that once we released it,” Joe says.

It's his penchant for hop forward beers that Liberty is best known for. C!tra spent years as the top-rated beer on beer app Untappd, but was recently usurped by something at the other end of the spectrum, Prohibition Porter, an imperial porter that spent nine months ageing on barrels that previously housed bourbon. Joe says he made it to test a theory: that you cannot put a good beer into a barrel and expect it to get better.

“Usually," he says, "it gets considerably worse.”

The process for making Prohibition is a logistical nightmare, involving using the wort from one mash to then mash other grains. The 2018 version sounded like a child that did not want to leave its room. There were stuck mashes, extremely long brew days, and then a bottling situation which required every bottle to be soaked, the label peeled off and a new label applied. But the finished product takes Joe back to a formative drinking experience – a bottle of barrel aged Firestone Walker beer at Wellington’s Hashigo Zake about ten years ago.

“I thought I was making good beer then. But then I tired [the Firestone Walker] and thought, ‘I’m not even a fucken padawan’. Fast forward to today, when I’m trying that first barrel of Prohibition, and the first thing that came into my head was that Firestone Walker beer.

“I’ve had respected beer judges and brewers come up to me and say it’s the best beer they’ve tried. And it’s just a fun beer to prove a theory I had, that’s all.”

Those judges usually use more polite words than those Mazen Hajjar of Hawkers did when he first met Joe at Auckland GABS in 2016.

It turns out Mazen had gone into a bottleshop, seen Liberty Knife Party – the winner of the Malthouse West Coast IPA Challenge in 2013 – and been compelled to buy all $500 worth to mule back to his staff.

“He then asked me to pay him a visit.”

Given that introduction, it’s no great shock the two breweries have formed something of a partnership. Last year, they toured Australia and New Zealand co-hosting events with IPAs they'd each brewed for the occasion, before the announcement regarding the brewing of Yakima Monster and Knife Party in Melbourne for the Australian market.

“It was never part of our plan, to export beer,” Joe says. “But there was a large demand for the beer. Now, they’re getting it in Australia as fresh as we do in New Zealand.”

Despite the praise from drinkers and brewers alike, Joe is reserved when talking about Liberty’s success.

“It’s just stable. People sometimes say we are going to be the next brewery bought out by someone big. Well, why? What’s happened?”

It sounds like he would be in no rush to sell, either.

“I’ve got a job. My mates and family have a job. We have so much to focus on too. We have kids, our staff have kids. We have to be responsible because, effectively, the staff rely on us for their income.”

That doesn't mean there's no time to have fun, however, as evidenced by the social media videos the company has created to promote new beers. While slightly unclear about how they started – perhaps they are a hangover from the chilli pepper eating videos – Jo insists they all serve a purpose, even if it they only look like a good excuse to make fun of a popular Netflix cooking show. There is still beer on the roof from the infamous video for Divine Wind and, while the video is no longer online, it's best summed up as a frat party for adults with Underworld’s Born Slippy providing a perfect soundtrack.

“The first video we did because we had to sell 2,000 litres of fresh hopped beer,” Joe says. “It comes out the same time as all the other fresh hopped beers, so you have to make it so that people want to drink your one.”

From there, the situation spiralled out of control. “They’re just a bit of fun, but hilarious. When I watch the final product I always crack up laughing.”

A highly-rated business, a taproom which just opened, and overseas demand all point to Joe and Christina doing the right things. But he claims they effectively fluked it.

“I didn’t study how to run a business. Christina was a nanny. We had no idea," he says. "We just got orders for beer and filled the orders.

“It’s just the way things turned out, and you’ve just go to roll with it.”

Joe will be in Melbourne to brew the first Aussie batch of Knife Party at Hawkers on October 12. You can join him and the Hawkers crew that evening at The Dan O'Connell. 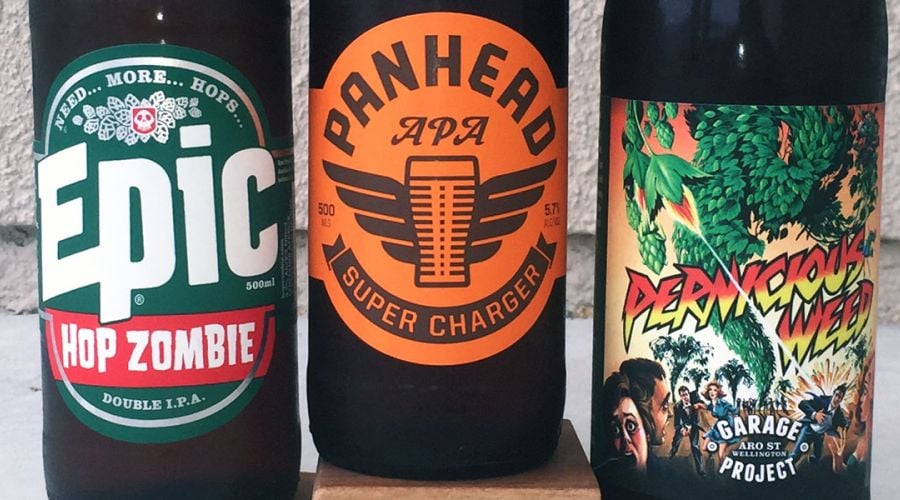