Recent years have seen the capital's brewing scene come to ever greater attention. BentSpoke has been leading the way, becoming established as a national brand, forging partnerships outside the beer world and picking up a medal at the prestigious World Beer Cup in the US earlier this year. A combination of winning enthusiasm, approachable beers and an impressive venue that welcomes visitors by the hundreds has seen Capital Brewing come out of the blocks fast. Pact Beer took out the AIBA Champion Gypsy Brewery trophy in 2017.

Yet all are less than five years old. Prior to BentSpoke opening its doors in June 2014, there were already breweries operating in Canberra: Zierholz, with its focus on European style ales and lagers, and The Wig & Pen, a brewpub that pulled its first beer through a handpump back in June 1994.

The longevity of the latter puts it in rarified company in Australia; there might be more than 500 brewing companies dotting the landscape today, but there was a mere handful of small, independent operators in the mid-1990s – fewer still that remain to this day. The Lord Nelson in The Rocks, Grand Ridge in Victoria and Last Drop Brewery in WA have been around longer (as have the Matilda Bay and Scharer's brands) and Bootleg Brewery also opened in the Margaret River region in 1994.

For a brewery of its size – the brew length is a mere six hectolitres, thus smaller than some brewery's pilot systems today – and one that has hardly ever packaged its beers (last year's Russian Imperial Stout release bring something of an anomaly) The Wig & Pen has a rather larger tale to tell. Indeed, we had it marked down for a retrospective feature to mark its quarter century in the middle of next year.

But, following owner Lachie McOmish's decision to put the business up for sale last week, it looks like a new chapter may have started by the time that milestone is reached.

In other words, his decision is one driven by a desire to hand over the keys so he can retire, ideally to someone who can inject the brewery with fresh impetus to take it on within a landscape unrecognisable from the mid-90s. In fact, as he goes on to explain, his retirement has already been somewhat delayed.

The site of the original Wig & Pen Tavern was set to be redeveloped and, says Lachie: "I had to make a decision as to whether I'd let it go and lose all the work that had gone into building the brand."

In the end, the decision was taken to move a short distance across the CBD to a new location within The Australian National University (ANU). Now, following a few challenging years re-establishing the business – including a "catastrophic refit" that led to much upheaval – he says: "It's far enough advanced that the right person can take over and drive it down the road."

What any new owner would be driving down the road is a brewpub with a story that will be unknown to many in Australia but represents an important piece in the jigsaw puzzle that is modern Australian craft beer. It's fair to say that, for beer aficionados of a certain age, a trip to try the beers at The Wig & Pen would be spoken of in a similar manner to those of East Coast drinkers about to head to WA and visit Feral's Swan Valley brewpub before their beers were available nationally.

In its earliest days, visitors to the pub would be met by a handful of handpumps; over time they were joined by a dozen taps pouring kegged beer; more than a decade ago, the first barrel aged beers started taking shape at the brewery. Twice in that period – in 1998 and 2012 – the AIBA Champion Small Brewery trophy made its way from Melbourne to The Wig & Pen.

On both occasions, brewing was in the hands of Richard Watkins, one of the co-founders of BentSpoke, who can also claim to be among the first experimenting with sour beer, even developing a Solera blending program at the brewpub, and producing beers such as the Mothur Funker Gueuze served with "Cake and Bacon" by Chris Badenoch at the first ever Good Beer Week Mega Dega back in 2013. In short, you can find much of contemporary Australian beer culture in microcosm within this one small brewpub.

"The change has been enormous," says Lachie. "In the early days, we had people saying, 'We'll try your homebrew.' Now you have clientele coming in and discussing their experiences drinking dark beers in Germany or lambics in Brussels. People really know their stuff.

"The main result is it means the greatest challenge is to make great beer. It's so different to what it was and that's a tribute to the changing palate of the Australian consumer."

Melbourne born Lachie, who had his earliest experience working with booze at the original Dan Murphy's in Prahran, first came to Canberra in the 1970s, landing a research job in government at "a really exciting time for the Labor Party". Being up close during Gough Whitlam's premiership was, he says, "extraordinary – I fell in love with the place."

More than 40 years and scores of beers later, with winemaker turned brewer James Paisley (who has his own nebbiolo in barrel for future release) and Justin Wilkes now responsbile for producing Wig & Pen beers, Lachie says he's open to an owner taking the business in new directions. Whether that means the brewery and brand being moved elsewhere, the brewpub becoming the "flagship" home for a brand that brews larger volumes of beer elsewhere, the creation of more Wig & Pen brewpubs or something else entirely, his hope is to see it continue and for the beers with which it made its name have a future.

"We've got a fantastic brewing team and really enthusiastic staff," he says. "[It's a] stepping stone towards an aggressive brand."

Of the 24 years and counting, he adds: "It's been a great ride, an adventure. You say to yourself you want to make a difference rather than get a gold watch and move to Cowes at 65.

"It will be a fantastic experience for whoever wants to take it over. It's challenging but there's so much fun." 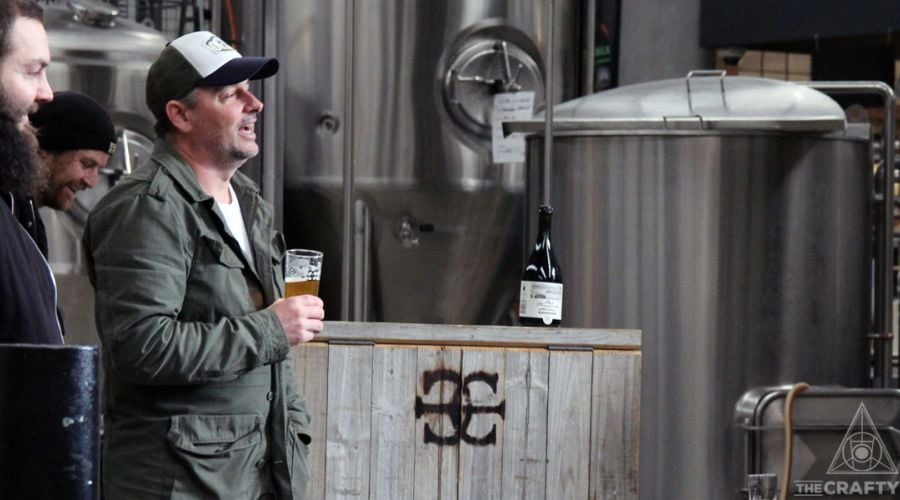 Pirate Life Brewing has been sold to CUB / AB InBev. More to come... read on