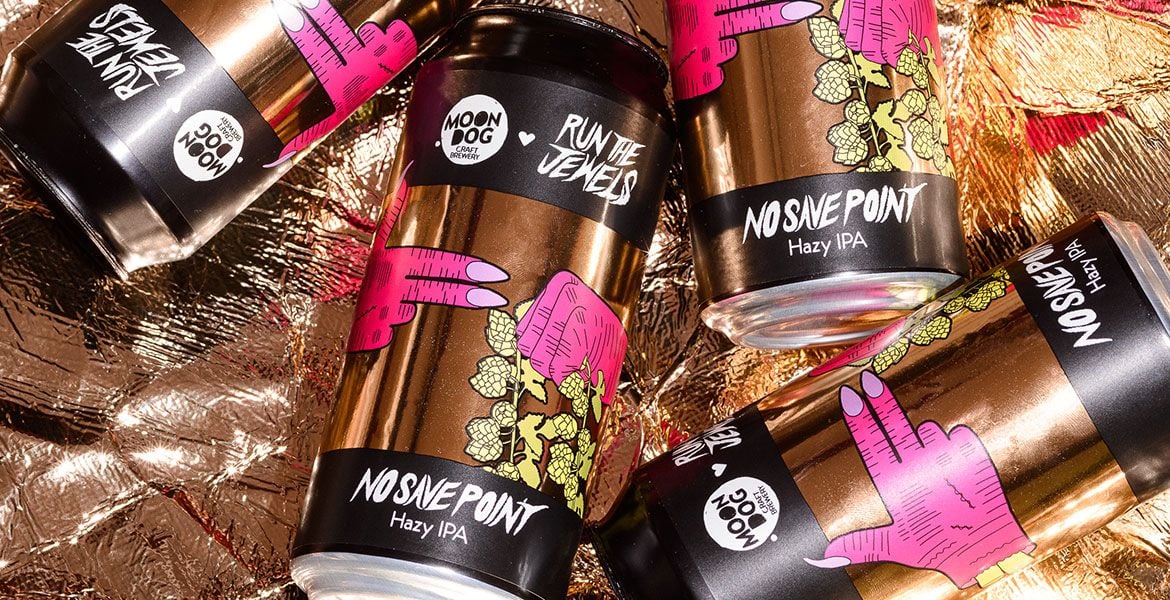 They might have started out with a small, Frankenstein's monster of a brewery in a quiet Abbotsford street but, today, Moon Dog are known for their big ideas. Moon Dog World can hold more than 700 hundred people (in a world without COVID at least), is home to a lagoon and waterfall (OK, the waterfall isn’t that big but the concept is a bloody big one), and since their Preston brewery opened Moon Dog has been sending their beers far and wide, both in Australia and beyond.

As far as collaborations go, their latest is on the big side too. The brewers have teamed up with American hip hop outfit Run The Jewels (RTJ) and a dozen other breweries across the world to take part in the global beer project No Save Point IPA. The beer is named after a recent RTJ track featured in the game Cyberpunk 2077, with each brewery invited to create a 6.5 percent ABV hazy IPA with their own spin; in Moon Dog's case, they chose to feature Australian hops.

The brewery’s head of new product development and export sales, Dave Langlands, says taking part in the global collab is a big deal for the brewery team, particularly given how many of them are fans of the group.

“The opportunity for us was amazing,” he says. “We love Run the Jewels; we love their music, we love their social conscience, and it seemed perfect.

“We made it a nice East Coast slash Aussie beer; having the hazy base with some Aussie hops in there.”

For the unaware, Run The Jewels is a hip hop group comprising rapper and producer El-P and rapper Killer Mike; two musicians with impressive careers in their own right before they came together and released the critically-lauded debut album Run The Jewels in 2013. They're known for politically-charged lyrics, with their most recent album, RTJ4, released earlier than planned last year due to the Black Lives Matter protests in the US.

Dave says Moon Dog was invited to take part by Kate Brankin; along with working for Pipeworks Brewing Co in Chicago, she works with the RTJ team.

“We’ve known her for years,” Dave says. “When we go over to the Great Leap Beijing beer festival, she’s over there every year with Pipeworks and we’ve become good friends with her.

“She works for Run The Jewels as bit of a craft beer industry consultant of sorts; it’s a bit less formal than that though, and much more of a collaborative type thing.”

“[They] ride the line of being serious while being funny at the same time,” Dave says.

“That resonates with Moon Dog so well, because we take beer really seriously but take the piss out of beer as well.”

Dave (above left with Moon Dog colleague Brook Hornung) adds that, while they regularly make beer with other breweries, collaborations with those outside the beer industry is something that's really exciting them at the moment.

“We’re talking to people that we haven’t previously talked to before with this beer, which is amazing,” he says.

“We’re starting to look a bit further afield with collaborations.”

No Save Point isn’t the hip hop group’s first foray into beer; they've released others under the Run The Brews banner and have described it as a natural process, saying craft brewing shares a similar ethos and passion to that with which they approach their own art:

As for No Save Point, Dave says they’ve already witnessed excitement ahead of the release, which comes in cans that feature a hoppy spin on the group’s iconic logo.

“It’s definitely going to be a collector’s item, which we’re excited about,” he says, before pointing out that, since it’s a hazy IPA, if you plan to save the can, make sure you drink the beer fresh first.

No Save Point is launching at Moon Dog Abbotsford on Friday, January 22 with limited merch available alongside the beer. Details here.

Articles by Will
moon dog rtj run the jewels collaborations As part of the Melbourne Food & Wine Festival 2011, we hosted two Liquid Lounge sessions on the banks of the river featuring a host of Australian brewers and Mikkeller. Here's what went down. read on