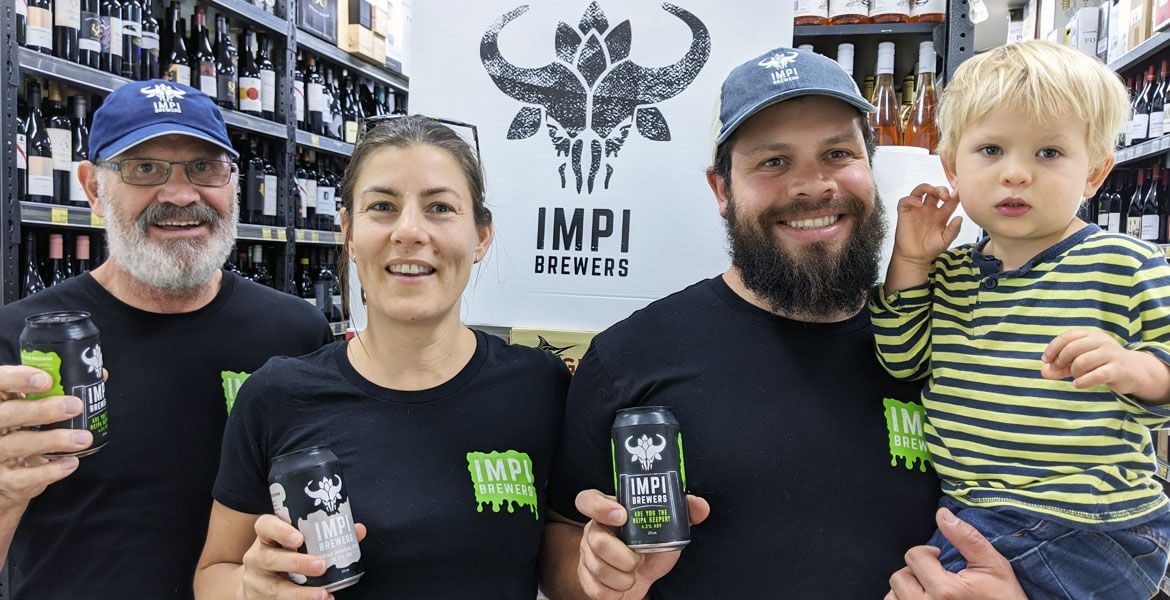 As with many brewing companies, it’s be a long road to get to this point, but this weekend sees Perth’s Impi Brewers finally welcome punters to their brewery cellar door.

The challenges, particularly those of last year, have allowed the family-run operation whose beers have been available around WA for a few years now the chance to expand capacity, set up a canning line, work on barrel projects, and even install a still for a future spirits range.

Ahead of their launch, Guy Southern chatted to Jason Marais, head brewer and co-owner of what is very much family affair at Impi, about a transcontinental life in beer for our ongoing Who Brews...? series.

What's your brewery name, and what was the inspiration for it?

South Africa is a country of many languages and ethnic backgrounds. KwaZulu-Natal, a coastal South African province known for its beaches, mountains and savannah populated by big game, is where I was born and raised. Impi is a Zulu word commonly referring to a group Zulu warriors. For us, Impi represents strength in numbers, working together and the importance of family.

Our logo is of an African water buffalo with a hops symbol merged with the head like a crown. The buffalo’s head is tilted down as if taking a drink. Geshondheid!

Impi Brewers is here to craft delicious beer by finding a balance between the passion for creating something new, and the precision of creating, and recreating, something great.

We were founded in October 2017, officially launched at the Perth Royal Beer Show in July 2018, and started packaging in 375ml cans in November 2019. Our original brew kit was a 500L system but we've recently upgraded to a 1,000L system, with a planned 50,000L capacity.

Impi is a family brewery. My dad, Leon (pictured with Bron, Jason and the future generation of Impis above), and I have built and continue to maintain the brewery, which is kept running on a solid diet of family and friends. Dad’s background in the army, designing and building houses and managing large scale electrical projects, has been invaluable.

My mum, Delia, contributes in many roles, from prepping and cutting 25kg of prickly pear for our special launch beer, a gin-barrel-aged Imperial Berliner Weisse, or hand-pitting 25kg of cherries for another upcoming beer – our barrel-aged Flanders Red – to maintenance, cleaning and plenty of festival experience.

My partner, Bron, has turned her science and public policy background to the role of sales and marketing for Impi, and my brother, Leon (Jnr) Marais, brings his IT background to our website development and maintenance.

Until early March 2020, I was as a quality control chemist in the pharmaceutical industry. I bring a love of food and flavours, supported by a degree in analytical chemistry and a grad cert in brewing.

The rest of our family and friends staff our stalls at festivals, bring a multitude of skills, and are an invaluable source of energy to Impi. Without them we would not be here!

According to Untappd, we’ve released 31 beers to date, but we may have missed a few along the way. We’ve just added the Russian Imperial Stout to our core range and relaunched an old favourite, Are you the NEIPA Keeper?

And our most recent seasonal and limited release beers have included Oak Ness Monster, an oak-aged Wee Heavy, Big Bad Banksia Braggot featuring honey from Tizz Beez – based on a Belgian Dark Strong Ale with the addition of Banksia honey, Don’t Need No Romeo – a spiced biscuit milkshake Red IPA, Risk it for the Biscuit Oat Brown Ale, and Melktert Munich Helles, an Afrikaner dessert-inspired Helles.

Of those, what's the beer which best represent you, and why?

Our Rooibos Saison tips its hat to our two main heartlands – traditional styles and flavour influences from South Africa.

Rooibos is a native, South African herbal tea. Launching the brewery with a Rooibos Saison may arguably not have made the most economic sense at the time, but it does give a bit of a peek into who we are as a brewery. We brew what we love and do well, and we like to add a twist to classic styles. Should we have gone hoppy instead and launched with an IPA? … possibly, but then we would not have been true to our own style.

Our core range Chocolate Rye Oatmeal Stout and South African IPA are also examples of our twist on classic styles.

Often it depends on who’s in the co-pilot seat. R&B, old school rock and punk… Offspring, Slipknot, anything that keeps you on your feet on big brew days.

There were many! We all at Impi have a great passion for great beer and tracing back to a single moment is impossible. For me, Rogue Brewery, and Rogue Dead Guy Ale more specifically, has to be a big part of the story.

Around ten years ago, I was hearing about all of these US beers, chocolate beers and more, and now here we are. They fuelled my homebrewing, and then a trip to Europe in 2014 developed my taste for the Belgian and European styles.

With a science background, I’m always interested in the chemistry behind beer.

I met my wife, Bron, over a few barley wines at a Queens Perth Brewer’s Loft event, so we may have to start there … or otherwise it might have to be one of the growing range of good non-alcoholic craft beers, as hydration is the key to survival. But, seriously, how could anyone ever just choose one!

The world of beer moves pretty fast these days, what are your plans for this year, 3 years and 5 years?

Brewing great beers that we love, and sharing them more widely!

2020 has taught us that plans are made for a-changin'. We’re still coming to terms with all of it, but we’re now finally able to open our production brewery in Wangara to the public for tastings and growler fills.

Beyond that, you’ll have to watch this space and come on the journey with us. We’d definitely like to open a brewpub, probably in the northern suburbs of Perth. But, most importantly, we’re keen to maintain the quality of our beers, grow in a way that we can sustain, and that can sustain us, and encourage others that are starting out in this vibrant and exciting industry.

Our house is "all weather is stout weather". We always seem to have a large number of big, dark, and barrel-aged beers.

But there’s always a mix of local and international craft beers, and a fair helping of our own beer.

We’ve been loving many of the deliciously hoppy and ever-changing range at Freestyle – shout out to Majic Juice for starters. And we’re often found hanging around the taps at Heroes and Villains, whose Saigon Fresh Ale is definitely a favourite.

Ooh… and Panther Cream from Margaret River Brewhouse likes to lurk in the cellar at our place too.

And a little shout out to new kids on the block, Txoko, who we got to hang out with at the last year’s Froth Town. They’ve have launched with a great range including a sour and particularly delicious NEIPA and, while not in our fridge, it is fresh in our minds.

So many other great beers are coming out from craft breweries in WA, and all over the country, that it’s really challenging to actually close the fridge door most days!

You can find us at many great Western Australian bottle shop and bars, from Karratha to the South West. If you’re in WA, you can purchase from our website, at many local Perth bottleshops and bars and festivals. Check the website and socials for more info on our brews.

Tickets to Impi’s launch events, which includes the debut of a Gin-barrel-aged Imperial Prickly Pear Berliner Weisse, are available here.

Impi Brewers are at 29/51 Lancaster Road, Wangara, and you'll find them and hundreds of other breweries and good beer venues in the free Crafty Pint app. For other entries in the Who Brews...? series, head here.