Eagle-eyed dwellers of the more esoteric realms of Australia’s craft beer world may have noticed something missing amid the flurry of spring releases: there was no beer from Doctor’s Orders. The absence of a new seasonal beer from one of the newest and more unusual of the country’s brewers, previously responsible for a black IPA, double white ale and black saison, was with good reason, however. Doc, or Darren Robinson, was on an extended trip to his homeland watching the All Blacks claim the Rugby World Cup (and calling into a bunch of breweries too, of course).

Now back home in Sydney, armed with fresh ideas from his brethren and with a new release imminent, he took time out to tell us a little about the origins of Doctor’s Orders. It turns out that although Darren (above right with the Beermen.tv crew) didn’t release his first commercial beer until very recently, he’s part of an impressive NSW brewing alumni; among the homebrewing mates of his youth are Shawn Sherlock (Murrayâs) and Keith Grice (Potter’s at Hunter Valley).

“I knew Shawn when he was lecturing at Newcastle University and Keith from Potter’s when he was still doing chemistry at university and working in a homebrewing shop. Over times things change, but my break came when I won a home brew comp run by the Schwartz Brewery. First prize was to brew commercially, so in mid-2009 I got to brew my chocolate hazelnut porter there. I kept a few kegs back and released the last of them in the middle of last year as Secret Squirrel, some on handpump.

“I then did some collaborations with Keith, including a Belgian breakfast rhubarb ale and Australia’s first black IPA (Mind Warp) that went on at the Bitter & Twisted Festival. It gave me a really good taste for it; experiencing the pleasure of selling your beer to the consumer and getting good feedback was awesome.”

Then the Australian Brewery was opened by former William Bull brewer Neal Cameron just 20 minutes from his house, Harts Pub appeared in The Rocks and offered the potential for a tap outlet and things began to fall into place.

“I realised that if I finished my licenses then everything was there,” says Darren. “Everything was possible. I thought that if I didn’t do it and craft beer went ballistic I could be looking back in 10 years and regretting my decision.”

Next step in the journey was an invite to brew for the Great Australian Beer SpecTAPular run by The Local Taphouses earlier this year. As the Darlinghurst venue’s Ale Stars host, he jumped at the chance and brewed his first Zephyr, a spiced double white ale that combines the Belgian witbier style with Aussie botanicals. It was well received and gave him an unexpected boost in the market.

He likens selling his beer to the Melbourne market as “shooting fish in a barrel” and also sees signs of hope in his local Sydney market. Yet, despite garnering so much interest in so few beers so quickly, he says he remains first and foremost a creative home brewer, still fervently reading up on whatever is happening at the fringes of the brewing world on the lookout for new ideas. He has a few concepts lined up and brought some ingredients (that he’s keeping secret) back from New Zealand to try in new beers. 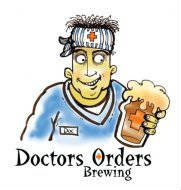 His summer release, a beefed up version of the Zephyr, is currently fermenting away and should be in kegs in the next couple of weeks. He’s not only upped the ABV, but there will be 4,000 litres instead of 2,000 this time around so more of you should be able to find out what the Doc is all about.

Having doubled the size of his regular batches, which he brews himself at the Australian Brewery in Rouse Hill, he’s also planning to find a way of releasing a number of smaller batch beers designed to take drinkers to another level of barminess. Apparently, there’s a new brewery we’ll be hearing about in the Sydney area soon at which he hopes to brew such beers; unfortunately, he won’t tell us who or where yet… As to whether he ever takes the step up from gypsy brewer to getting a kit bigger than the 70 litre setup in his shed remains up in the air. Meanwhile, he has “something really big” in mind for the next SpecTAPular in May.

If you’re keen to be first in line when he does start letting us in on his secrets, you can keep up to date at the Doctor’s Orders website or follow him on Twitter and Facebook.