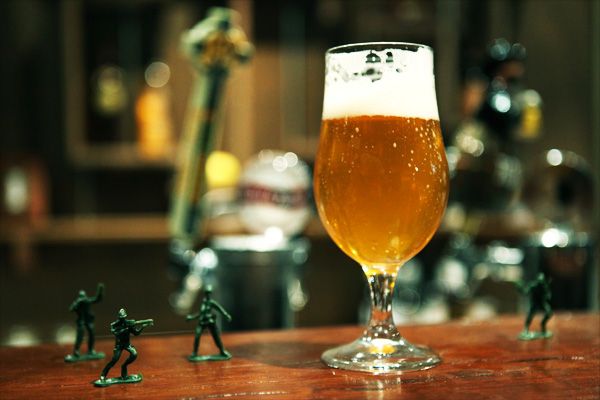 It wasn’t too long ago that there were plenty bemoaning the narrowing of choice for craft beer lovers in Brisbane with the loss of some tap freedom at the city’s Platform bar. Since then, Nectar bottleshop has closed too but, conversely, the likes of Bitter Suite have opened, making a song and dance about the wonders of quality beer. And now Scratch Bar, a self-proclaimed “craft beer dive” has been added to the landscape.

The 60-person venue with a purist’s approach to craft beer has only been open a few days, but already we’re hearing good things about it. It’s on Park Road, described by Scratch’s founders as “Brisbane’s best fake-euro wine ‘em and dine 'em restaurant strip”, and promises a constantly rotating tap and bottle beer lineup.

The bar’s three founders, Ben Nichols, Kieran Ryan and Patrick Shevlin, grew up together in Canberra and all happened to end up in Brisbane. They proclaim a mixed background in bar tending, boutique bottle store attending, music, photography and television, all of which somehow led them to open Scratch. Why?

“Not for the money, that’s for sure,” says Ben. “We care viciously about the little guys and thought that if we did a craft beer bar, we’d do it our way. The joint itself doesn’t have much class but then neither do we, only the alcohol does. We present it in good glassware and offer tastings of everything on tap to whoever wants it before they buy. We’ve been passionate about craft beer for a while now and made the bar we wanted to hang out at: an unpretentious celebration of beer! People are sitting at the tall as shit bar and talking about beer instead of hiding in a corner guzzling it and that’s how we like it!”

Those who follow Crafty closely will recall stories about the success of the Spotted Cow in Toowoomba and a group led by Wade Curtis of Four Hearts Brewing looking to get craft beer off the ground in Ipswich. With Bacchus Brewing knocking out small batches of all manner of beers at one end of the scale and Burleigh Brewing producing award-winning beers on a much larger scale, it seems there’s quite a buzz for good beer in the state.

“There’s never been a better time to be a craft beer drinker in Queensland,” says Ben. “In the last couple of years there’s actually become a ‘choice’ of places you can go to drink craft beer, and in different way, which is fantastic. The more places that have craft beer, the better it is for everywhere that serves craft beer. On that note, we fully support every venue in Brisbane that cares for and serves craft beer. Things are looking up around here and just because we have a bar of our own now, doesn’t mean I’ll stop going to great specialist beer places like Bitter Suite, Kerbside and Archive.”

In terms of what’s on offer at Scratch, there’s a healthy mix of crafties from across Australia and further afield. Within the first week, they’d tapped beers from 3 Ravens, Harviestoun, Rogue and Moylan’s. Imminent arrivals include Mikkeller, Bacchus and Bridge Road. In the fridge are bottles from the likes of Brewdog, Burleigh, North Coast, Holgate, Epic, Jamieson, St Ambroise, Beer Here, Brew Boys, Coney Island, Anderson Valley, Amager, Sunshack (Cider) and Tuatara.

And if that’s not enough to whet your appetite on a Friday afternoon, we don’t know what is!