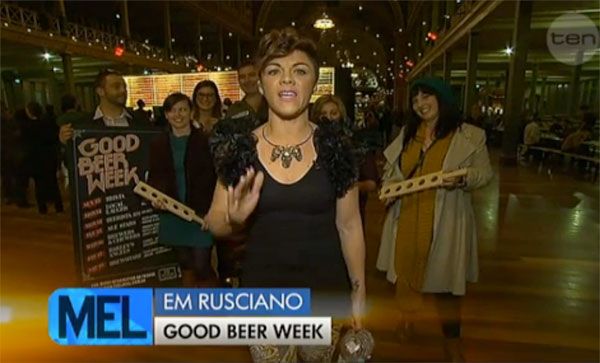 Yes! Good Beer Week 2012 is underway. And the nation knows about it after The Project dropped in to the second session of the Great Australasian Beer Spectapular yesterday evening to announce the opening of the festival. It was featured in the Metro Roundup section of the show, with presenter Em Rusciano keen to highlight the beery Mother’s Day offerings coming up tomorrow, which includes free entry for mums to GABS, free tasting paddles at Red Hill’s event and freebies for mums at the Thunder Road Open House too. It was a great, high profile bonus for the festival, one that was only confirmed at the last minute, but which, along with The Age acting as media partner for GABS is ensuring that craft beer is getting greater coverage than at any time before in Australia. That Em had a particularly gorgeous beer wench on hand to show off one of the tasting paddles will no doubt have given the industry an additional boost…

As for GABS, the Royal Exhibition Building looked, well, spectacular. The shipping containers were dressed impressively, lights were strung between the mezzanines overhead, sharply suited bands entertained inside and out and, of course, there were plenty of beers to choose from. After a relatively quiet session in the afternoon, which allowed the organisers to iron out some kinks in the operation of the day, there was a big crowd for the evening. This did for a period lead to some rather gnarly queues for the bar that looked like a successful game of Snake from above but which has dissipated by the end of the evening. Perhaps advice for the busier sessions would be to get in early and stock up with a couple of paddles to ride out the hump?

On the beer front, there was much online love for a host of different beers. Those getting the most tweets of approval included the Bright Brewery Resistance Red Ale, Feral’s Berliner Weisse, the Yeastie Boys' Gunnamatta, Bridge Road’s God Save The Lager and Renaissance Brewing’s Oak-Aged Stonecutter Ale, all of which Crafty heartily endorses. Most divisive was Moon Dog’s Mr Mistoffelees, a beer that is hugely strange even by their standards, refreshing tart up front then leaving a distinctly distinct aftertaste. Some loved it, others certainly didn’t, which is exactly how the brewers wanted it.

With GABS launched, today is the day Good Beer Week officially kicks off. The Crafty Pint will be continuing its week at Holgate’s sold out Bull and Raven Cask Off this afternoon, while the Good Beer Week Team will be calling into other events, with many of the beers being featured for the weeklong showcases already tapped. We’ll be bringing you as much coverage as we can here and via the Good Beer Week Twitter and Facebook pages – make sure you share your tales and photos there too – while you can look out for live coverage online from the Royal Exhibition Building today on Brews News.

As we said in yesterday’s newsletter: “Have a great time, drink some incredible beers, eat amazing food, meet wonderful people and remember â Good Beer Week is a marathon not a sprint!”

Check out the Great Northern promo vid for their Pint of Origin WA tap takeover!

@Chris_McBeer: “Right then, here we go. May the beer gods bless this @GoodBeerWeek and all who drink within her.”

@OllyNoonan: “@Danny__Bishop how had I not heard about @goodbeerweek? Clearly I talk to the wrong people.”

First to announce they had completed all 57 GABS beers was @SirKieranAllen on Twitter. Three of the 60 have been scratched.

@Ale_of_a_time: “I want to congratulate individual brewers for their #gabs2012 … but so many were great that it’s far too much work. So good work everyone!”

@TrentRice: “You know you have a problem when you forget how it’s usually pronounced, & praise the hard work of your staff as "Spectapular” #GABS2012"

Don’t forget to keep up to date with events selling out – there is a handy guide to events with remaining tickets here.

The embed code for the slot on The Project isn’t working but you can watch their slot from GABS by clicking the link here – Good Beer Week is about two minutes in.