When it comes to craft beer role models, itâs hard to look past our friends in the USA. Over the past few decades, they have turned their industry from essentially nothing into the largest in the world. Many of the pioneers from those early days have gone on to become giants of the craft beer scene, steadily expanding their products into mainstream markets and helping continue the growth of craft beer. Their success has encouraged others to take the plunge and there are now around 2,000 craft breweries in the USA.

Almost three quarters of those breweries are members of the Brewers Association (BA), a not-for-profit organisation focused on promoting and protecting American craft beer, craft breweries and the community of brewing enthusiasts. In what should be inspiration for the divided craft beer factions in Australia, the Brewers Association was officially formed in 2005 through the merging of the long-standing Association of Brewers and the Brewers Association of America. As part of their mandate, representatives from the BA were in Melbourne recently after arranging the entry of several American beers into the Australian International Beer Awards (AIBA). And, as a bonus for Good Beer Week, they organised a five course lunch attended by some of their high calibre members – the likes of Sierra Nevada and Moylanâs. It was a chance to hear some of them speak and for the BA to showcase a range of American craft beers.

The event was made possible through the Export Development Program, whose aim is to promote American craft beer in other countries. In itself, simply having a program dedicated to growing the countryâs craft beer presence internationally says something about the health of the industry and the progressive attitude they are adopting. The lunch gave Aussie industry insiders a chance to hear firsthand about some of the trends and innovations happening in the USA.

The most noticeable example showed itself during the second course when the waiters poured beer not from a bottle, but from a can. The craft canning movement has been gaining a bit of traction in these parts recently, but is very much in its infancy. In the US, though, craft brewers have wholeheartedly embraced the concept. From a logistics and distribution point of view, canned beer has tremendous appeal – cans are lighter, smaller and less fragile, therefore easier to transport. 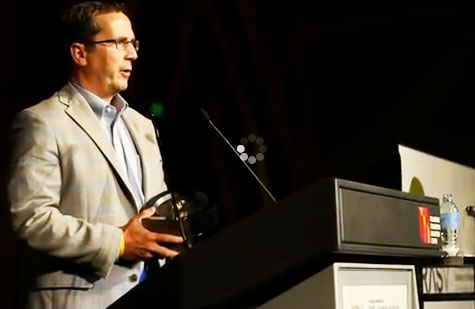 Bob Pease, from the US Brewers Association, collects another AIBA trophy

And US brewers clearly have no issue with the quality of canned beer. At the lunch, two of the five beers served came from a can. And at the AIBA (Australian International Brewing Awards), Caldera Brewing Company from Oregon won the trophy for Best IPA â a canned beer and one of four trophies collected on the night by the BA’s Bob Pease on behalf of the association’s members.

Denise Jones, head brewer for Moylanâs Brewery from California (2011’s AIBA Champion Exhibitor), mentioned that âso many US breweries can their beer that dedicated Canned Beer Festivals are heldâ.

The downside to cans, as opposed to glass bottles, is the high amount of energy required to produce them. In a world where the environmental impact of industry is being scrutinised at every point, there is a necessity for businesses to respond. And in the brewing world, no company is being more progressive than Californiaâs Sierra Nevada.

As Steve Grossman, Sierra Nevadaâs brewery ambassador, put it simply, âbreweries use a lot of energyâ. This is one of the reasons they pursue an environmental policy that seeks to minimise waste and encourage sustainable practices. He spoke specifically about some of the practices in place throughout their business.

âWe have over 10,000 solar panels which, along with our other means of generating energy, provide around 80 per cent of the energy used by the brewery. Another example is the HotRot system which is the first of its kind in the US and it composts all our restaurant scraps, as well as a lot of material from the brewery."

A glance at the companyâs website shows a multitude of other eco-friendly initiatives, right across the production and supply chain. As Grossman says: âWeâre fortunate that our success means we have the opportunity to try these methods out before others. We just hope that theyâll follow.â

But while the USA is well ahead in many aspects of their craft beer scene, there is still much respect for what is being achieved in Australia. Grossman put some perspective on things when he said that âit probably took 20 years for USA craft beer to achieve what Australia has done in the last five yearsâ.

Brendan Moylan, founder of Moylanâs Brewery, remarked that Good Beer Week was the best and most professional he had been to in his years in the business and Grossman said heâd âdefinitely be back next year." 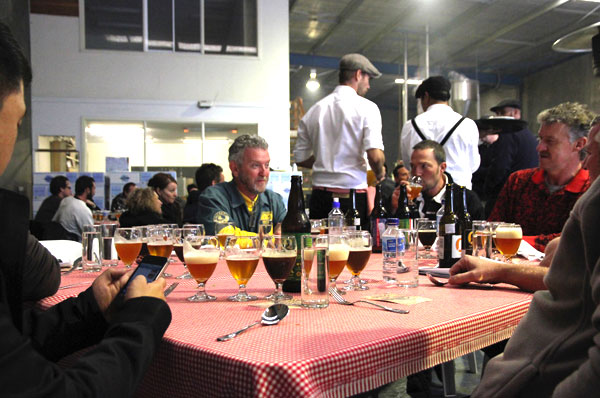 Brendan Moylan holds court at the Masterclass of Champions

The mutual admiration between beer lovers is leading to hands-on involvement in other ways. Sierra Nevada announced during their visit to Melbourne that they will be taking on a young Australian brewer for a two week apprenticeship at their brewery in a scholarship being established by Temple Brewery & Brasserie and Good Beer Week. Being offered such an incredibly rare opportunity shows that the ties that bind the two countries are continually growing stronger. And if that means thereâs an increase in beer traffic, hopefully itâs a trend thatâs set to continue.

For more information on the US Brewers Association, visit their website.

Photo at top shows Denise Jones, from Moylan’s, measuring out hops with Glenn Harrison from Hargreaves Hill as they brew the as-yet-unnamed Good Beer Week collaboration with Kjetil Jikiun from NÃ¸gne Ã.