The word âcollaborateâ has been thrown about quite a bit lately. In fact, the word probably hasnât had such wide usage since 1990 when Vanilla Ice had a number one hit after urging the world to âStop, collaborate and listenâ. In the first five months of this year, overseas brewers have checked in and out of this countryâs craft breweries with such regularity that itâs often difficult to recall whoâs been brewing what, where and with whom. From the well known to the up-and-comers, hardcore craft connoisseurs to brewers of international brands, they all seem intent on coming down to Australia to get their hand on our malt sacks.

Richard Adamson (above right) and Oscar McMahon of Young Henryâs brewery have seen the potential that collaborative efforts can have in bringing new ideas, new techniques and new ingredients to a brewing process. But rather than teaming up with any big name foreign brewers, theyâve decided to take more local approach to collaborations, one which better reflects themselves and their Newtown home. What they came up with is a couple of genuine rock ‘n’ roll collaborations.

Their concept was to invite some of their favourite Sydney musicians into the brewery, do some head scratching – or head banging, depending on the genre – and see what sort of a beer might come out of it.

First on the bill was Peter Fenton (above left), frontman for seminal Aussie rock band, Crow. The band had achieved a measure of success and popular following in the 90s before splitting towards the end of the decade. In recent years, the band has reformed for several performances and planned recordings. Adamson is a longtime Crow fan and the two met backstage at a Grinderman concert. While they were talking, Fenton found out about a certain brewerâs background and it turned out that the respect for their art was mutual.

âI asked what Richard did and he said âOh, Iâm a brewerâ and it turned out that he used to make one of my favourite beers when he was brewing at Barons – the Black Wattle lager,â says Peter. At a later point (while having a beer, as tends to be the case) the pair got talking about what sort of creative project they could do together and the wheels were set in motion.

When we visited the brewery a couple of weeks ago, the brew was already underway with the collaborators in the midst of sampling the wort. Fenton explains part of the creative process that had gone on to get the beer to that point: âWeâd been talking a bit about the history of the land around the brewery and the Newtown and Enmore area, about its Aboriginal past and the Cadigal people, how it used to be scrubland with kangaroos hopping around, then its more industrial days up to the point weâre at now.

âI wrote some lyrics based on those historical elements, plus my own experiences in the Newtown area like playing gigs at the Sando (The Sandringham Hotel) and of King Street after midnight. What we ended up with was quite a dark and moody beast, a mix of old and new – the indigenous, ingenious Inner West.

âThen Richard talked about how to capture those elements in a beer and I actually helped him brew it, which was fascinating. For example, the reference to the native land comes through the use of wattleseed and Richard used dark malt to try and incorporate the darker elements of the area."

The beer that will ultimately come from this collaboration is designed to be a smooth dark lager at around 5.5% with dark chocolate, spice and a hint of smokiness. The ingredients certainly point that way with smokey peated malt, chocolate rye and chocolate wheat malts included. It also has the aforementioned wattleseed to give nuttiness, plus akudjura which has raisin characters. Fenton has got into the spirit of punning which craft brewers seem to adopt with gusto and named the beer âBlack En Moreâ – a fitting tribute to both the beer and the area. 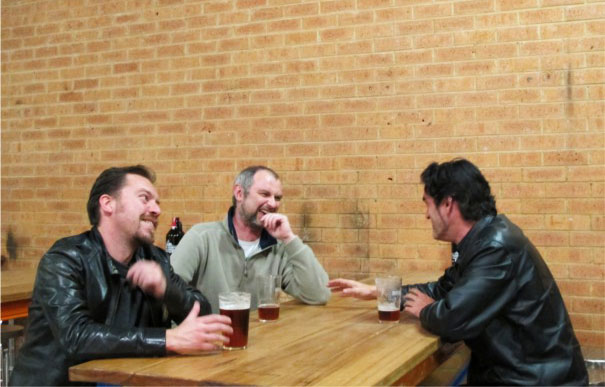 At a completely different point in the musical spectrum comes Front End Loader. These are the guys that won the ARIA award last year in the Best Hard Rock/Heavy Metal album category and who also chart pretty high on the self deprecation scale. Nowhere is that better evidenced than their magnificent acceptance speech for the aforementioned ARIA, or the exploits of said trophy once it was in their hands (including what appears to be an attempt to exchange it for beer).

Adamson has effectively grown up with the band, from the â95 Big Day Out to all manner of sweaty rock and roll venues. It was late last year, after a show at the Annadale Hotel, when he invited them down to the brewery to celebrate their recent accolade that the collaboration idea kicked off. But on this most recent visit to the brewery, it was straight down to business. Well, sort of.

Dressed in black leather jackets and looking every part the seasoned rockers, Davis Claymore and Bo Campbell approached initial consultations about their beer collaboration with a decidedly different approach to Peter Fenton. When Adamson asked what the FEL boys had in mind in terms of a beer, it was unanimous and straightforward: âmake it strong!â In terms of their favourite beer, the guys showed their industry nouse, proclaiming their preference for âany beer thatâs freeâ.

But in terms of style, Claymore said: âwe actually all really love our lagers and talked with Richard about making a really strong one.“ After discussing the practicalities or otherwise of making an Imperial Pilsner then tasting a bunch of Young Henry’s beers out of the tank for a bit of inspiration, there was finally agreement as to the style they would go for.

This rock and roll brew will be a dry and spicy rye ale with a sweet hit of agave – a direct reference to the bandâs fondness for tequila, for which they are known to stop playing mid-set until the audience supplies the sufficient quota. In homage to the darker gods of rock, the beer will come in at 6.66% and will be called Fresh Six – also the name of a forthcoming FEL EP. The whole band will be heading to the brewery on brew day because, as the band say, âhaving our own beer is a dream come true, a career high, and a personal best. And it absolutely shits all over winning an ARIA.â

The Black En More dark lager will be launched by Peter Fenton on Saturday 23rd June at the Young Henryâs brewery. Tickets are $40 and strictly limited but will give you plenty of the beer, plus a Beef & Black En More pie made by the gods of baking at Newtownâs Black Star Pastry. You can find booking details here.

Fresh Six will be given a suitably grand rock and roll induction to the world on Saturday 14th of July. The occasion is Front End Loaderâs 20th birthday and the launch of their new EP, as well as the Annandale Hotelâs 12th birthday. The FEL boys will be there, quite possibly playing alongside You Am I.

Itâs worth pointing out that beer lovers will be competing with musical groupies for tickets to these gigs, so keep your eyes peeled for the dates as they appear and get in quick! Weâll endeavour to post them on the Events Diary as soon as possible.

And finally, because these rock and roll brews are one-offs and in rather short supply, thereâs little chance of getting yours hands on them if you live outside the immediate area. After the launch gigs, locals who are quick to act should be able to get a growler fill at the brewery or possibly pick it up on tap at select local bars. Keep an eye on the Young Henryâs Twitter and Facebook accounts for updates.