At some point or another, weâve all been taken in by a smooth operator. The kind with the friendly face, infatuating gaze and a knowing smile. Theyâll invite you in, win your trust, then take the nose right from under your eyes.

So to come across a group of people describing themselves with such a moniker is a sure sign to use caution. However, when you meet the up-and-comers behind Sydneyâs recently formed Grifter Brewing Co. you find the only thing they will be taking from anyone is the desire to drink bad beer.

The three friends behind the Grifter label, Trent Evans, Matt King and Glenn Wignall, have taken a very recent and very fast path from homebrewing towards establishing a recognised and respected craft beer brand. And as with so many similar stories of homebrewers making a step up, it was passion, enthusiasm and a little bit of good fortune that helped push things in the right direction.

Through a series of slightly serendipitous occurrences, the boys fell into contact with Richard Adamson of Young Henryâs just at the point when the brewery was on the verge of opening and had spare capacity. They got talking about beery things and in fairly short time Richard had offered use of a 1200L tank and free rein of the brewery to make their beer.

That rare opportunity wasnât lost on the Grifters and it didnât so much light a spark of enthusiasm as set a fire raging. They got stuck in straight away, scaling up their recipe, brewing, kegging and justifiably congratulating themselves on their first commercial brew.

However, once that was done, other problems of running a beer company quickly made themselves known, i.e. what do you do with 30-odd kegs of your own beer? The obvious answer is to sell it. But to whom? And how?

Says Glenn: âBecause we didnât know the inside of the industry, it was a bit demoralising at first. Weâd approach venues to sell our beer and theyâd say âwhat deal will you give us?â. We didnât know what they meant.â Having to compete with the big players offering incentives gave them a crash course in the realities of the beer business, but the main lesson it taught them was to trust in the quality of their product.

âAfter getting knocked back at several places, we tried Mojo Records. They had a different attitude where they understood craft beer and what we were doing. They took our beer in Growlers and that was the moment we believed it could actually work.â And since then it has been working in some style: âThe first keg we put on at the Old Fitzroy Hotel went in two hoursâ.

As theyâve been enticing new venues and new drinkers, theyâve also been finding that success brings rather different problems. Instead of worrying about how to sell more beer, itâs now more a question of how to brew enough beer to keep up. But all things considered, there are worse problems than starting a business from scratch and within two months having a sought-after product.

And regardless of any ups and downs, it seems to be an experience theyâre relishing. Theyâre even finding time to revel in their status as the littlest guy and finding amusement in some of the mismatches.

Says Matt: âOn the last delivery I did, just as I turned up there a truck was pulling out with hundreds of kegs on it. I pull up in an old Holden Astra with two kegs in the boot and one in the back seat. Itâs pretty funny." 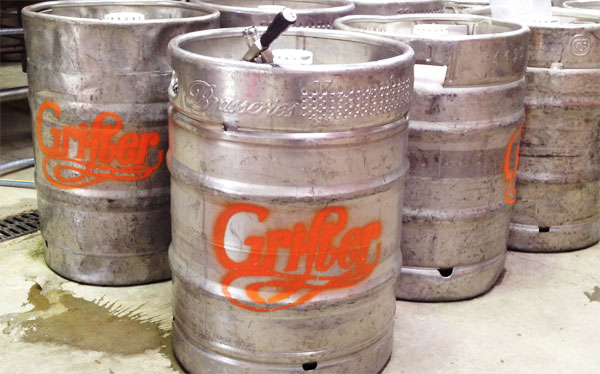 âWe borrowed a van once to deliver several kegs at once,“ adds Trent. "That was a pretty big deal!â

Ultimately, Grifter Brewing is a bunch of great mates who unquestionably love their beer, make lovely beer and got the chance to get it out in public. And all the while theyâre having a grand old time doing it. As Glenn says when quizzed about choosing the Grifter name: âItâs meant to be fun. A grifter just seems like an interesting characterâ.

And thatâs something they try to push with the beer itself, giving birth to characters like âEdwardâ. He may be easy-going, approachable and wholesome, but they want to leave a little mystery and allow you to discover those subtle nuances for yourself rather than following any preconceptions you might give by simply labelling it a âPale Aleâ.

While that little bit of intrigue might not be to everyoneâs tastes, weâd suggest that if you do happen to see Edward around town, be sure to make his acquaintance.