It’s no secret that a new brewery under the Thunder Road banner has been under construction in Brunswick for some months now. However, the team there has been keeping things so close to their collective chest that details have been little more than sketchy rumours. However, they’ve pulled back the curtains a little in recent days, releasing a brief video online and appearing at the ongoing Fed Square Microbrewery Showcase with a prototype version of their launch beer, the Full Steam Pale Lager.

The Crafty Pint caught up with the brewing team, Harvey and Marcus, before the Showcase kicked off to try to find out more. And while answers to questions remain a little in the “How long’s a piece of string?” camp, things are becoming clearer as their embark on their “search for the perfect beer”.

So what do we know? Well, they hope to have beer on the market next March. At that point there will be “at least one” beer (the lager) available, maybe more. They are installing 30 taps at the brewery, which they plan to fill, ultimately, with 30 of their own beers. When this in-brewery bar will be open isn’t yet clear, but there will also be a tasting room and “Australiana / brewery-ana” (thanks for the addition to the vocabulary, Harvey) library located in the classic bluestone building at the front of the brewery. 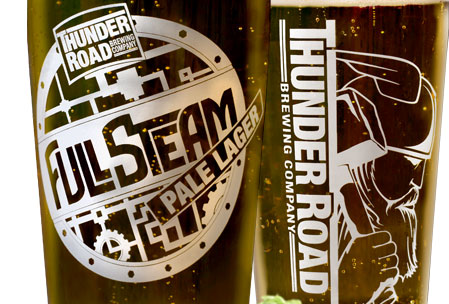 Some of you may know Marcus from his time at 3 Ravens. Harvey, a biochemist as well as brewer, previously headed the TAPS Brewery in Istanbul before heading to Mexicali in Mexico via California. Here’s what else they had to say:

Marcus: “It’s the search for the perfect beer. The artistic vision meets the technical; crackpots and scientists in the same place.”

Harvey: “One of the things that stands out is the lab. That’s something that I view as absolutely crucial to the brewing process.”

Marcus: “The Pale Lager is made with top end German ingredients [malts and noble hops] with some very German aspects. When you taste it there’s a definite beginning, middle and end.”

Harvey: “The goalpost is 30 beers [on tap in their brewery]. The search for the perfect beer isn’t going to happen in one beer.”

Marcus: “There will be a lot of variation, a lot of experimental products on the kind of scale that hasn’t been seen here before. Our spiritual home will be in Brunswick, but the range will extend far beyond that.”

So, big plans to live up to. They’re also promising growlers and a beer garden on their Brunswick site. Crafty had a quick taste of the Full Steam yesterday and it was a good example of what can be done with a lager when treated properly. Some pleasant honey and biscuit notes from the malt and light, lifted hops and the sort of really clean finish many Aussie lagers fail to achieve.

The Crafty Pint also visited the brewery a couple of months back when many of the tanks were in. It’s an impressive system, emblazoned with the Thunder Road logo, on a scale similar to that installed by Stone & Wood in Byron Bay. Both breweries appear to have similar ambitions for their output, with Thunder Road’s brewery designed to be capable of pumping out six brews every 24 hours should the demand require it.

Some specs for the beer nerds out there:

All in all, these are some rather grand sounding grand plans. Here’s hoping they can live up to the hype. Certainly, with Temple unveiling their vision for a brewery and brasserie just a few hundred yards away, it’s looking like a bloody good time to live in Brunswick East.