Home brewing has come a long way from the foul-tasting concoctions of sugar and bakerâs yeast that your granddad used to make. The modern home brewer has access to many of the same ingredients that commercial breweries use and this, plus the renewed interest in all things crafty and homespun, means it was only a matter of time before home brew got a makeover.

BrewSmith is the brainchild of Melbourne couple Adrian MacGeraghty and Carolyn Rowe who began home brewing in 2011 only to find, as MacGeraghty explains, that they were often disappointed with the results.

“We got good beer, we got bad beer, we got terrible beer we had to throw away,” he says. “So we wanted to make a consistent process that always gave a good result.” This led the pair to begin developing BrewSmith in February of this year and they wet their boozy baby’s head last month at Collingwoodâs Robert Burns Hotel.

There, in the upstairs function room, the gentle glow of soft spotlights and flickering tea candles cast a flattering light upon what just might have been the most fashionably dressed home brewing event in history. This may not be saying much, but no one could deny that the quota of skinny jeans, ironic t-shirts and tidy beards was unusually high for an event of this kind. What’s more, as well as getting to taste the BrewSmith beers, potential home brewers were also well fed on a selection of cocktail tapas.

Touting itself as âAustraliaâs first premium home brew kitâ, BrewSmith is ideally suited to those people for whom the traditional 23-litre home brew kit is just too much beer to store. The kit is âapartment-sizedâ and comes complete with a dinky little glass fermenter that makes a five litre batch of beer. The ingredients come in a natty calico bag containing dried malt extract, genuine ale yeast and hops (Cascade and Fuggles) plus specialty grains or spices depending on the kit. Some ingredients â honey, for example â are not included.

To those unfamiliar with the world of home brewing, this differs from the traditional kit, which comprises a can of pre-hopped, liquid malt extract to which you add water and sugar, in that the home brewer must boil the ingredients together for an hour in order to develop flavour and extract hop bitterness.

MacGeraghty says that anyone can achieve good results with the kits so long as they are made with due care and hygiene, adding that “higher fermentation temperatures will result in beer that is fruitier and dryer, but itâll still taste good.”

The BrewSmith kits currently come in three flavours â Chocolate Paradise Porter, Honey Bomb Wheat Beer and Summer Citrus Blonde Ale â and all three finished beers were available for tasting at the launch. They do pretty much what it says on the label: the porter is sweet and chocolatey, the blonde ale packs a citrus punch thanks to lemon zest and coriander seeds, and the wheat beer has a smooth, honeyed character. The puntersâ reaction was overwhelmingly positive, with the Honey Bomb Wheat Beer a clear favourite.

With home brewing being such an established hobby it would be easy to assume that thereâs little room in the market place for yet another kit. However, according to MacGeraghty, the BrewSmith home brewer is very different from the old guard. 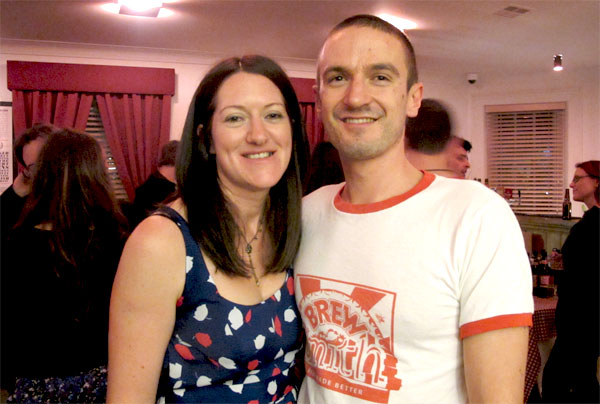 “We want to bring it to people who are young and active and just want to drink good beer,” he says. “Thatâs why it had to be a different kind of product. Basically, anyone who likes trying new things and making stuff themselves will probably like to make their own awesome beer. Weâre not trying to sell it to the fifty-year-old whoâs doing it by himself in his garage.”

On the evidence of the launch night â middle-aged onanistic hermits aside – BrewSmith certainly appears to be hitting its target market.

Written by Chris Brady, a man who is consumed by beer: he writes about it, reads about it and brews it. Often the tables are turned and Chris consumes the beer too. If youâd like to make contact, you can do so here.