Joker In The Pack

A few weeks ago, we noted a little hubbub in the online beer world about a new release from a brewing company we’d not heard of before. Our lack of knowledge was excusable, however, as it turned out the Sideshow Brewers were new to the world.

“Excellent,” we thought. “We’ll get on to that shortly.”

Shortly, it seems, wasn’t soon enough. Soon staff at one Melbourne bottleshop were posting messages online that it was the fastest selling beer they’d had in stock in recent memory while a mate of The Crafty Pint sent an excited email asking: “Know anything about these guys?” with a photo of the bottle attached.

So, by the time we finally caught up with the man behind Sideshow Brewers, Clyde D'Angelis, this week he was already bottling the third batch of his Ticket Booth American Pale Ale just five weeks after the first batch was delivered to stores around Melbourne. Not bad going for a new brewing company that has had next to no publicity; it says something for the power of word of mouth in the Australian craft the world today.

“I’d been homebrewing for about 12 years,” says Clyde, “and had always just wanted to put my beer out there commercially. I started off with a Cooper’s kit for Christmas, started adding hops after a month and it just took off. I don’t think I’ve made the same beer twice as I’m always doing something different with each batch.

“We started with an American Pale Ale as we didn’t want to do anything too weird or wacky for the first beer. We’ve got plenty of those kind of things to bring out â that’s why we’re called Sideshow: because we are a bit different. We’re doing everything around the sideshow and circus theme and started with the Ticket Booth as that is the beginning of your journey at a circus.

“The beer is only 35 IBUs [International Bitterness Units, which are a measure of a beer’s bitterness obtained from its hops] whereas the recipe I use at home is about 45 and is pretty much an IPA. I backed off as I didn’t want to go too hard at the start but it’s still got a lot of hops. In an 800 litre batch there’s six kilograms of hops â Citra in the boil, Cascade and Amarillo for dry hopping.”

Following hot on the heels of 7 Cent Brewing – also based in Melbourne’s north – and a number of new brewing companies in other states, such as Grifter, Wayward and Dennis, that have put out first beers in recent months, Sideshow’s arrival shows there is no slowing down in the expansion of the Australian craft brewing scene. Homebrewers everywhere are seemingly emboldened by the success of so many others and keen to take the next step. Many are doing it cautiously, by brewing on other people’s equipment rather than investing in their own from the start, although often brewing on said equipment themselves rather than handing over a recipe and picking up the beer weeks later.

As for Clyde, he has a background is in retail, having grown up around his parents' fruit shop. He’s currently working with fire equipment, a job he hopes will be his last before he is able to invest in his own brewery. For now, he’s brewing with the guys at Kooinda.

“I’ve known [Kooinda head brewer] Mick [Opie] for years,” says Clyde. “I was always around the brewery and it meant that when the licence came through I was ready to go one week later.

“It’s been good to get other people to try my beer as it had only been family and friends trying it up until now, but it’s been getting some really good feedback. We’re looking at doing our second release in May for Good Beer Week and that beer will be a chocolate milk Porter. I’ve been playing around with that for two years. It uses 10 kg of chocolate and 20 kg of milk powder â it’s like a chocolate milkshake.”

Looking beyond that Clyde says his other beers will include a Strawberry Blonde: a red-coloured blonde ale made with dried raspberries, strawberries, hibiscus and rose petals that he says is midway between a cider and a beer. There could be a spiced, Christmasy ale to follow too. 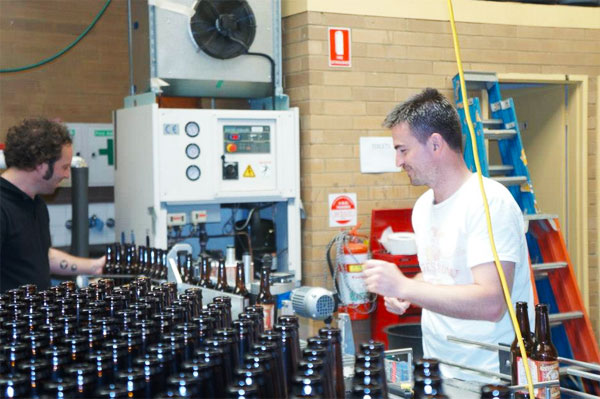 Clyde (right) bottling his first ever batch at Kooinda

“The plan 100 per cent is to have my own brewery,” he says. “That’ll definitely happen. This is a great place to start. First get the brand out there and once I’m at a certain point then it’ll be time for my own place.”

If you’ve not had the chance to try his Ticket Booth Pale Ale yet, there may still be a few bottles in stores around Melbourne. Otherwise, anyone heading to this month’s Federation Square Microbreweries Showcase will have the chance to sample it and meet Clyde in person. It takes place on March 20 and 21 with tickets available through Ticketmaster now.

So what of the beer itself? Considering Clyde admits to having tamed the home brewed beer on which this is based, it’s still a pretty ballsy, full-flavoured beer to put out as your first release. In fact, sampling it for the first time is not dissimilar to the first time we came across Kooinda’s own APA.

There are some prominent floral and citrusy aromas – even a hint of lemon sherbert – from the late hopping, backed up by some plenty of caramel. Those distinct West Coast American hop flavours sit nicely with the rich caramel and toffee malts too in what is a cloudy, medium bodied and very drinkable ale. The bitterness is indeed fairly restrained â at least if you’re a regular craft beer drinker â making it easy to see why this is a beer that has been flying off the shelves. We eagerly await the future releases from Sideshow Brewers. 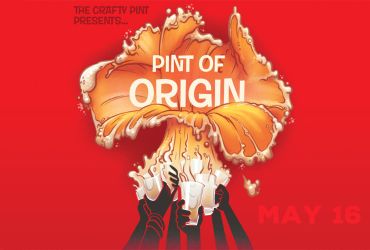