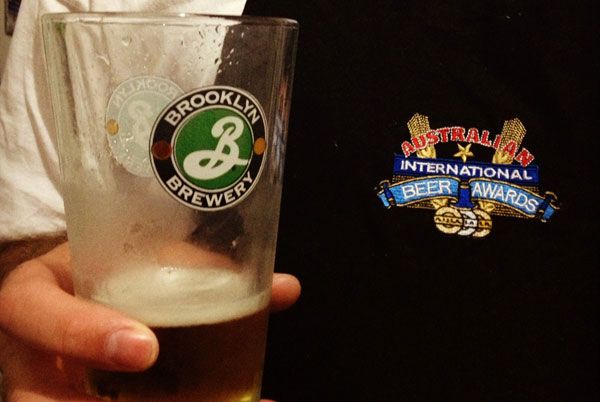 There was an interesting build up to the most recent Crafty Pint Blind Tasting Panel. In our hunt to gather a solid collection of Australian and top international versions of the Saison style, we found ourselves collecting one bottle left in a paper bag – hidden outside the front of a house – and heading to a brewery on the day of the tasting to get a growler fill of another.

Even then, however, a couple of last minute family emergencies meant numbers on the panel were reduced and a couple of beers didn’t make the lineup, including Temple’s Saison and Southern Bay’s Le Petit Tronc. At least the dropouts claimed they couldn’t make if for family reasons â it could just be that Saisons hold less appeal for some than IPAs…

Otherwise, things were pretty much unchanged, with AIBA Steward Prof Pilsner taking charge of the pouring and presentation â resplendent in a brand new 2013 Australian International Beer Awards steward’s apron â and the panel comprising brewers (professional and amateur), an avid craft beer drinker and The Crafty Pint. The Brewers Association guidelines were presented beforehand (find them here), confirming what a broad church the style can be and suggesting that scoring could well end up more uneven than in the past.

And so it proved – to an extent – with only a couple of the beers achieving scores within a couple of points by every panelist. As before, beers were scored out of five for appearance, aroma and taste and out of ten for overall impressions for a total of 25. These were tallied and divided by the number of judges to give an average score out of 25.

There was no surprise at the top (even if there was one “surprise” beer thrown in), with one of the world’s classic beers finishing more than 2.5 points clear in front. Tasting notes would suggest the unique characteristics of the Sorachi Ace hop worked against Brooklyn Brewery’s beer, while the Barking Duck’s overt cloudiness cost it a couple of points. In the middle of the peloton, a mere 2.25 points separated second and sixth.

As with the Jamieson’s Beast from an earlier Panel, the low score for Temple’s Saison de Miel – a beer we placed in our Best Beers of 2012 for James Halliday’s Wine Companion Magazine and which is highly rated throughout the beer world – should be discounted as the beer was not presenting correctly. However, as this series focuses on beers bought as our readers would be able to buy them rather than sent in direct by the brewers (and states where the beers have been purchased) it is left in the list.

So, there you have it. It was an interesting panel to take part in, with the style such a subtle yet complex one and one that drinkers perhaps know less about than others.

Next up is a Good Beer Week themed one: a Pint of Origin Pale Ale Challenge. We’re looking to pit two pales from each state against each other, with maybe a couple of international classics thrown into the mix too. If you’ve any you’d like to see on the lineup – perhaps your favourite from your home state – then feel free to suggest them at the bottom of this article.

“I’d want to sprinkle that on my chips.”

“I think what changed my opinion at the end is that it turned gross.”

“I was drinking Hahn Pilsener at the start because I knew we were sampling Saisons; otherwise I’d have been on the Black IPAs at five o'clock.”

getting blind with crafty saison