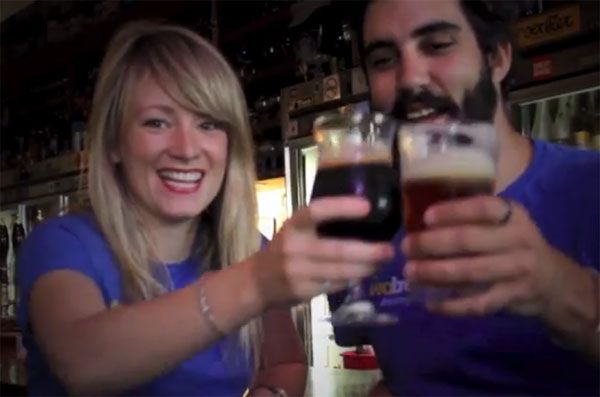 Given it’s been rather more than a month since we last ran a feature on one of the many colourful blogs that exist in the world of Aussie craft beer, the series' name is becoming a little less than accurate. Still, semantics never stopped Douglas Adams from knocking out six books in the Hitchhiker’s Guide To The Galaxy trilogy (although he might have been well advised to stop at three, law of diminishing returns and all that…). So, after what we shall henceforth term an intentional hiatus, we’re back.

And we’re back with a cracker of a blog too. Many of you will either know of Steve Brockman and Steph Cope or will have drunk their beers. Steve was one half of the brewing team most likely to be mistaken for terrorists with Paul Wyman at The Monk in Freo, while Steph was part of the brewing team at Gage Roads.

Late last year they decided to apply for working visas for the US and headed off on a beery adventure, starting in San Diego and seeking employment and enlightenment along the way. A few months in, they’ve created a seriously high quality blog, full of brewing insight as well as the tales of their life on the road in Jean Claude van Damme. They’ve even shot a short video all about themselves and their trip (which you can view below) and have started interviewing many of the characters they’ve met along the way.

Anyway, enough of us, over to them…

The website has been running since December, but we've have only really had the Wordpress blog rolling since we arrived in the US in mid Feb. We’ve now finally settled down in San Diego – it's a real tough place to live: eternal sunshine and around 60 breweries within striking distance. But we're happy to sacrifice.

At the moment it’s all about our experiences while travelling through the States, and impressions of famous breweries from young brewers' eyes. Eventually the site will contain more tips and tricks for brewers, home brewers and anyone getting into craft beer. As we learn new techniques and processes, or visit new places we’ll start to broadcast what we’ve learnt so that others can follow along and learn too.

What you do when not blogging:

We’re drinking fantastic fresh San Diego craft brewed beer! And looking for jobs, meeting people with in the industry. There’s some exciting times coming up for Two Brewers Abroad for sure!

Why did you start writing the blog?

To let other people come along on the ride!

We realise not every young brewer can just pack up and leave, and travel overseas to work in great craft beer scenes, so we hope the blog goes some way to showing what’s happening over here. It’s often said that the States is ten years further down the track than us in Australia – we’d like to go some way into finding out why that’s so. While we might not find the ultimate answer, we’re here to learn, meet a bunch of passionate craft beer folks and have a fun time doing it.

We’re actually having a lot of fun creating content on the site – Steph has found a new talent in writing beer descriptions, they’re quite fun to read. We’re got a few interesting sections on the site, going up in the next few weeks, so stay tuned.

What do you guys love / enjoy most about beer?

We both really enjoy the art vs science play-off you have as a brewer. You have to have both a creative side and a technical side to be a good brewer and it’s a challenge we both enjoy, and we hope we convey both sides on our website.

Steve: So much to choose from – We have a Top 5 list on our website at the moment – Ballast Point’s Indra Kunindra Curry Export Stout has been one of the more unusual highlights of the trip so far.
Steph: Stone Brewing Co Coffee RIS fresh from the bright beer tank.

Favourite place to enjoy a beer?

Steve: The Sail & Anchor front bar, before they recently gutted it and made it more ALH, complete with uniforms and old photos on the wall. Now it’ll have to be a nice sunny day in the Norfolk)’s beer garden, in Freo.

Steph: The Wheaty in my home state of SA. It is a perfect pub, and will only get better.

Hopes for beer in Australia?

There’s a fierce pride and passion when mentioning craft beer in the US. The craft brewers continually push the boundaries of what people think beer is, or what ingredients it can contain. Over here, they don’t set out to brew a beer that appeases the masses, they brew what they’d like to drink, and invest a lot of time into educating the consumer on what they’re drinking. You also see the breweries here band together really well – it really is craft vs the megaswill, a large part of this is due to the fantastic work of the Brewers Association. It’s also refreshing to see some of the big craft brewers, like Stone Brewing Co, New Belgium and Sierra Nevada (about 7, 17 and 22 times bigger than Matilda Bay respectively) still fiercely independent, and so committed to craft beer.

In Australia, we’re rapidly expanding as we have seen in the US, and the setting up of CBIA is an important step in helping organise the collective effort of out industry. Education on all levels; brewers, bar staff and the general public, is a huge part of what we should be aiming to improve in Australia, And when you see how nuts everyone goes for the crazy stuff, as seen at GABS and the like, we hope a lot more Aussie brewers take a punt and brew something left of centre. We both think though Australia has a very bright future, and we both look forward to being a part of it.