Best Of The Batch

When Santa skimmed over this year's naughty and nice list – moving swiftly past Lance Armstrong, the global intelligence community and the entire roster of the Essendon football club – he evidently paused next to the names Andrew Fineran and Chris Sidwa. What he obviously decided was that these two had been very good indeed because, just in time for Christmas, they've had a brand new brewery delivered. Truth be told, the brewery was actually delivered back in October, but that simply means the real gift at this time of year comes in the fact that the Batch Brewing Company is ready to open.

The concept behind this new Marrickville venture, as you might hazard a guess from the name, is to produce one-off small batches of beer. That's not to say they won't have regular or even semi-regular releases – an American Pale Ale (currently Batch #2 for those taking notes) should be a constant – but pretty much everything else will be created as and when opportunities arise. That might mean something seasonal, a collaboration, a combination of the two or simply something the duo are particularly keen on brewing. Thereâs a certain freedom and fun in doing things this way, which is clearly part of the appeal.

Says Andrew (pictured above left): "We're not a corporation. We don't need to be brewing hundreds of thousands of litres of beer every year. If we can brew once or twice a week to start with, that's great. We're doing this because we love it and hopefully it's enough to make a living."

Things at least seem to be heading in the right direction with one collaboration already under their belt, working with local patisserie Strawberry Fields to brew a suitable replacement for Guinness for use in their beef pie. When Andrew suggests that one of their main goals as a company is "to have a big focus on our local community", usurping one of the world's leading beer brands in favour of a stout brewed down the road represents a pretty promising start.

While the next joint brewing project hasn't been locked in yet, they've had the thumbs-up from the team at Young Henrys in neighbouring Newtown for a collaboration in the near future – the suggestion is that brew could be determined through the aptly named concept of “roulette brewing”. And don't be surprised to see some form of Batch Brewing malt liquor – both Andrew and Chris are expat Americans and, pretty well by default, have more cred in that area than most of the rest of us.

Fun times ahead, clearly, but in the meantime the pair have kept busy getting to grips with their shiny new toys and trialling brews like the aforementioned stout, a Halloween pumpkin ale and an amber ale. While theyâve been pleased with the results of those, there have been a few stumbles along the way, which is only natural when making the step up from homebrewing to a commercial brewhouse.

Says Chris (above right): "We tried throwing whole hop flowers into a big brew, because, well, why not? But we didn't put them in a hop bag so ended up having to spend 10 hours cleaning them out." 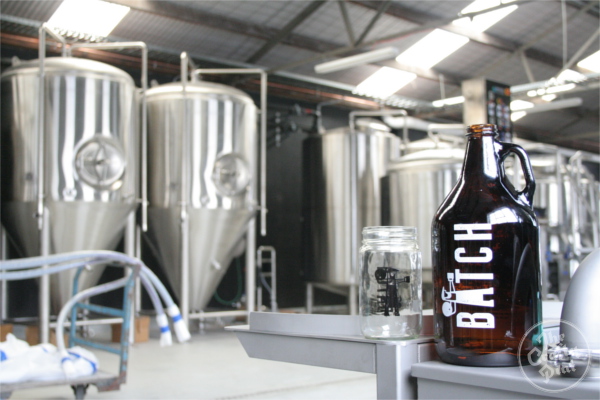 The shiniest of gifts this Christmas

Looking on the bright side, they suggest they now know the brewery far more intimately than expected, having had to take it all apart, clean it out and put it back together again.

With the brewing side of things under control (for now, at least…), they've been putting the finishing touches on the tasting bar before throwing the doors open to the public. Taps have been installed, kegs hooked up, furniture moved in, labels hand stamped and growlers are at the ready. All that's needed is people to come and drink the beer which, in all honesty, doesn't seem like much of a problem for a brewery these days.

As Chris says: "We already have people walking past on their way to the train station, coming in and asking when we'll be open."

Happily, the answer to that question is "now".